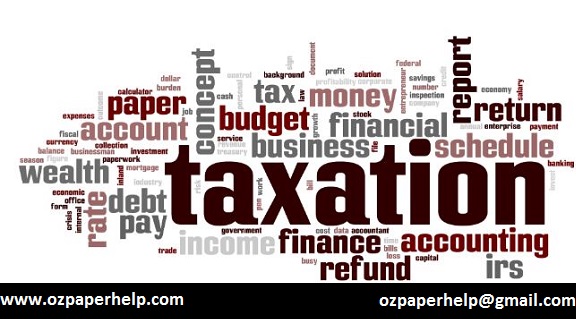 With the ramified changes every tax payer needs to set up proper taxation compliance and tax planning in order to determine his right tax liability. The allowance of the tax deduction and exception of the certain income is done with the consideration of the income tax assessment act 1977. Having taxation laws will help the business organisations also in regulating their business activities accordingly. In this report, there are two different case studies are given, in which the first case applies to John, in which the rent paid in advanced has been established as to either it is capital cost or revenue cost. The purpose of this project is to develop the knowledge of Australian tax law, applicable proviso, sanction concept related to tax, LTCG, STCG. After that, the another case study makes the comparable to Alex Kingsford, where the decision was made as to either or not the traveling cost between the workplace and the home should be used as a deducted. After that, the result of the related case study was provided to demonstrate with the proper taxation compliance.

(a) Specific facts about the matter:-

Mr John has been given a license to operate a Melbourne casino known as the Casino East. The Government obtained the license for the operation of the casino for a term of 10 years. John also received 90-year permission for casino construction. License was purchased at a amount of $180 million by the Australia government agency and the balance of $80 million was rent paid in advanced covering the first 10 years' rent. Negotiations were also made to pay an annual rent of $4,00,000 for the 80-year lease period.

(b) Legal problem recognition and analysis:-

In this report, the concerns that arise relate to whether the rent paid in advanced charged for the $80 million casino is a revenue or capital cost. According to the provision of income tax assessment Act 1997, a withdrawal can be reported for the majority of business expenditure induce to purchase tangible assets. When the asset or items is consumed the asset can be identified as an asset of revenue nature (Australian taxation office, 2020). On another hand the asset can be classified as a capital expenditure, as a major capital investment that a company makes for the maintenance or expansion of firms for extra revenue. Capital costs are paid for the purchase of long-term assets that produce profits over a number of many years. Revenue expenditure on sales is those expenses incurred to cover the operating cost of running a company. The income expenditure is deducted in the year it is paid while the capital expenditure is deductible in years (Woellner, et al. 2010).

In this scenario, John obtained an operating license and took casino construction for a term of 90 years at a cost of $180 million, and $80 million is a loan in advanced means prepaid loan, with a loan of $4, 00,000 being charged annually. According to the Income Tax Assessment Act, 1997 costs of $180 million for the buy of a license shall be deemed to be capital expenditure, the sum of $80 million payable as a deferred rent shall also be calculated as capital expense. Hence the annual rent of $4, 00,000 is deemed to be the income expenditure (Woellner, et al. 2010).

The accrued ten-year rent for the house would also be listed as capital expenditure. The sum charged by the government for securing a casino license was $180 million for 90 years, the payment is considered a capital expenses for John. The estimated sum of $270 million would also be listed as a capital expenditure for john according to Income Tax Assessment Act, 1997 (Australian taxation office, 2020). The total sum of rent that is expected to be pay annually, i.e. $4, 00,000, will be known as John's revenue expenditure. In general, capital spending should be reduced for a period of years (Australian taxation office, 2020). This means that the expenses would be distributed over a several years, while the tax expenditure induce by John in the form of the annual rent is deductible in the same year incurred (Hodgson, & Pearce, 2015).

According to this problem the rent paid in advanced shall be treated as a capital expenses of john. Nevertheless, according to ITAA, subsection 40-885(5)(d), 1997, the taxpayer cannot subtract the cost incurred in respect of the lease or any other civil or fair right. Referring to the report study cited, it can be assumed that the expense of the license and the rent paid in advanced is a capital expenditure (Australian taxation office, 2020). And deduction may be permitted, while if any expenditure has been induce to buy a lease, deduction may not be permitted (Ratanges 2015).

(a) Specific facts about the matter:-

In this case MR Alex is a mechanical engineer currently works for Melbourne. He has house in Dandenong, where he and his family live. . Alex works for such catering company 15 days a month and receives considerable revenue from this. . He is expected to travelling to his house business from the ABC workshop and for this he travels by car or often by UBER. He needs to subtract the moving expense that he suffered (Mäkelä, et al. 2008).

(b) Legal problem recognition and analysis :-

The legal question here is while the deduction is allowable under the ITAA 1977 in Australia, to Alex for the cost he induce in moving to the place of firm where he lived from the ABC engineering laboratory where he worked. According to applicable provison of ITAA, 1997, trips between home and work are regarded as private trips while in some cases the deduction can be reported for travel in the middle of work and home as well as for certain journeys betwixt two workplaces. The section also states that if the travelling is partially private than the permissible expenses, and it induce for the performance of work duties accordingly (Stewart, 2011).

Traveling from the usual workplace to another alternate workplace wether on duty and then returning to the same workplace or home.

Switch between two separate places of work, for example if a person has a second job .

Places of business change, i.e. the person works every day at more than one location before come back home (Evans, 2013).

When it is important to bring tools or equipment that must be used for work and may, for example, be left at the office ladder..

All the expenses which are small in nature and made as very tiny amount such as collectding postal while traveling from home to office then that expenses would not be allowed as deduction even if it was provided by the employer to the employee.

To determine the tax allowance of deduction on the money received by employee from the employer first nature or object of the payment received would be assessed then after the allow the deduction would be judged. The segment also considers the travel costs of passengers, taxi transport services such as Uber, planes, trains, taxis or buses (Australian taxation office, 2020). However, there are several expenses which would not be allowed as deduction on the expenses given by employer to employees for the traveling.

Expenses sustained from driving over a day betwixt home and workplace . Travel costs incurred for small tasks such as picking up the mail on the way home or at work (Australian taxation office, 2020). . For example, works outstation regular official hours over timing. The cost of the vehicle is also only acceptable if the car is used by an worker and used exclusively for work-related tasks and the employee earns no travel allowance from the employer (Mackie, Jara-Dıaz, & Fowkes, 2011).

Mr Alex work only for fifteen days in every month at home for catering business , Alex can demand a deduction in respect of travel only for these 15 days and not for the whole month. Because, Alex not working for the whole month, but just 15 days. Even by applying the case laws, the facts given in the case of Alex are similar to those given in the case laws set out above. In the above list of unacceptable travel expenditure includes expenses incurred when a person works at his official place where he work and returns to work where he works for someone else. Traveling expenditure of Alex is not allowable. Furthermore, should Alex incur any travel expenses in connection with the work provided by his employer in Melbourne, this shall be admissible as a deductible expenditure (Reyneke, 2012).

Having regard to the aforementioned proviso of ITAA, 1936, it is clear that MR Alex have right of claim the deduction in his ITR only for 15 days in month because he’s working days is 15 in a months. Accordingly, the argument for travel expenses under ITAA 1997 is unallowable (Australian taxation office, 2020).

After assessing the case and in context with the compliance with the ITAA, 1977, it is inferred that all the traveling expenses made by the Alex and paid by the employer would be allowed as deduction if it is used for the employment purpose and expensed for the traveling from the home to office or one office to another office for the official purpose as may be accustomed to act as per the instruction of the employer. In the compliance of the ITAA, 1977, all the expenses reimbursed by the employer to employee for the traveling would be allowed as deduction considering the allowance or any other compliance program with its employment or personal usage.

It can be complete from the above-mentioned report that there is a demand to comply with various relevant provisions of ITAA, 1997 and related case law judgement for proper treatment in different situations where such laws apply. However, along with assesse should have a clear knowledge of the legal laws that may be applicable on the allowed or disallowed expenses in context with the deduction. There is a distinction between capital expenditure and revenue expenditure and if, by applying tax laws, expense is examine as capital in nature, taxers not demand deduction from that expenditure.

Evans, C. C. (2013). The operating costs of taxing the capital gains of individuals: a comparative study of Australia and the UK, with particular reference to the compliance costs of certain tax design features. University of New South Wales.