This document comprises brief explanation about the explanation of the quiz application that has been made in an Integrated Development Environment (IDE) which is Visual Studio. The document will briefly explain the implementation that has taken place for the development of the quiz application, with appropriate screenshots of the code at runtime. It will further also mention the comparison that takes place between development that has been taken place in an IDE software, and a non IDE software respectively, as well as the description as how the debugging process can fix things and how coding standards help organizations in the development phase of an application. 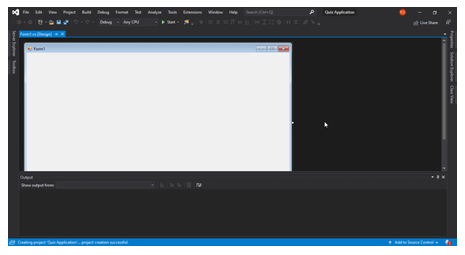 As seen above is the user interface of the Visual Studio IDE, and this is the software that was used for the development of the application respectively.At first, for the creation of the application it is required for the creation of a project, and for creating a project, the visual studio IDE will be started. After that, a new project will be created.The demonstration for the same has been shown below. 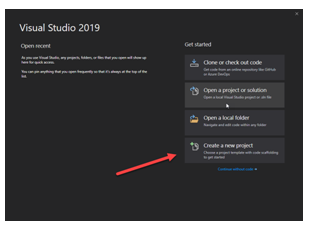 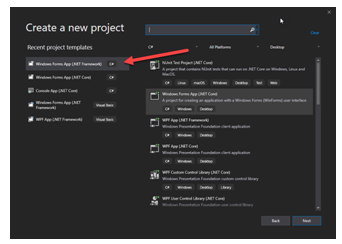 As it can be highlighted the creation of a windows forms application will be selected for this application. With this step being done, the next step is to name the project. 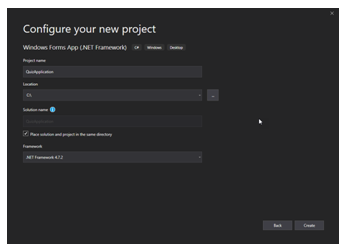 As it can be seen above that the naming of the project and the directory where the project will be saved has been entered accordingly. With all of these steps being done, now we are good to go for developing our quiz application.

At the initial stage, after our project has been saved a blank form can be seen appearing in front of us. Which has been mentioned in the screenshot down below. 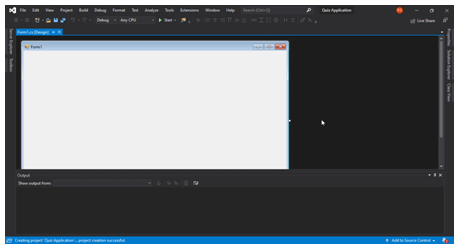 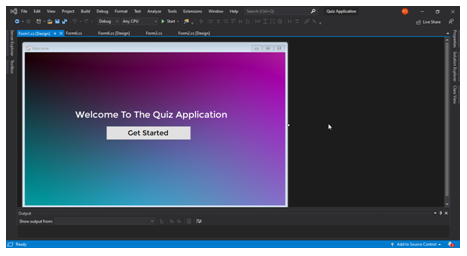 As seen above, we have developed the design of our Form 1, which is the Welcome Page for our Quiz Application. The interface has a welcome message written and a button to Get Started for taking the quiz respectively. The functionality of button has taken place by coding, and the code is as follows:

As seen above, the code is for navigating to the next form and hiding the current form that the user is currently on. All of this implementation will take place on button click respectively. And now, we will see the demonstration of the code with the help of the screenshot that will be mentioned down below.

As it can be seen the development of the Form 2 Design has been done according to the screenshot that has been mentioned above. With this being done, we will write the code for the functionality of the buttons mentioned in the interface. The code is as follows: 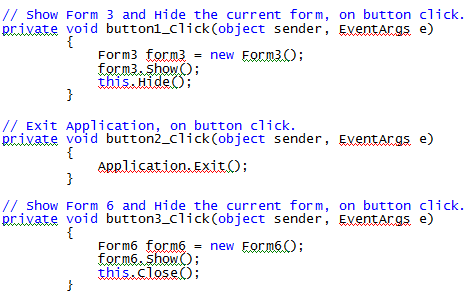 As it can be seen from the design that are quite many empty fields that are placed on the form, The reason behind this is the values that will be appearing on the click of the next button, down below.

As well as on the right hand side of the form it can be clearly observed that a timer and a score pointer has been added that will be displayed at the run time of the quiz.

Additionally the timer is set to 10 minutes and the user has 10 minutes for solving the quiz and submitting it accordingly. Further we will take look at the code and the functionality that takes place on run time of the form respectively. 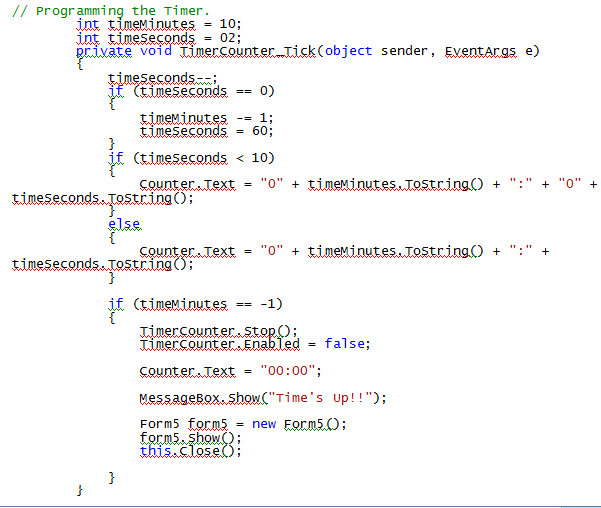 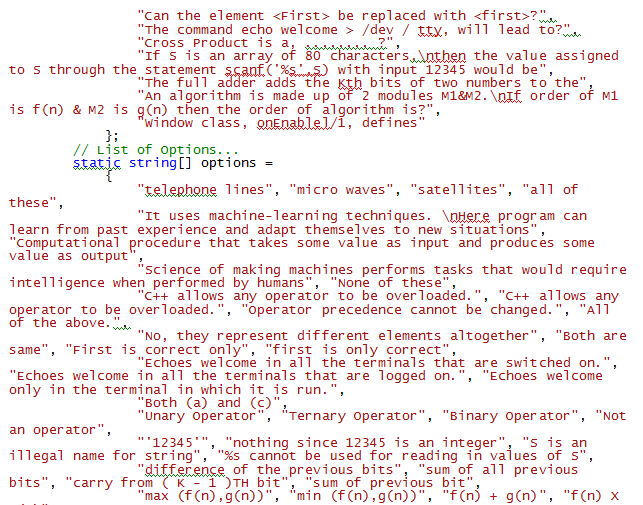 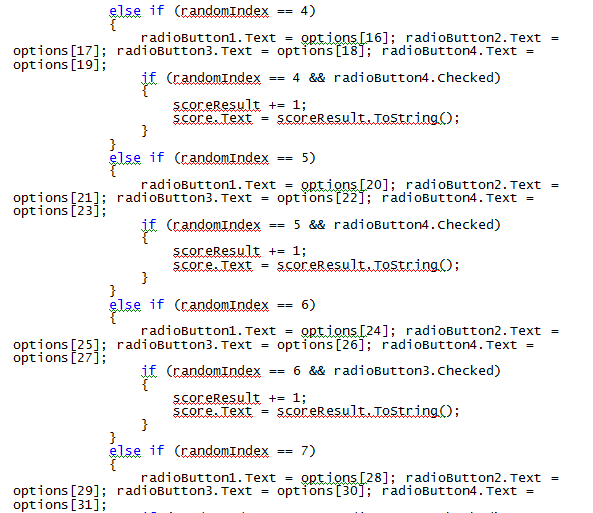 Coming to the last set of the code, this is the selection algorithm that has been implemented for selecting the question from the finite set of the array.

As seen above a GetIndex method has been made, in which a random object has been made from the Random class, at the initial stage.

An integer data type is then being constructed named as index, using the random object and method next iterates through from 0 to the length of the questions array here.

A Loop is then implemented further with the condition that until the answered array does not comprise duplicate values the index will iterate and give out the index value, by which the fetching of the question takes place accordingly.

And a if condition is then being used, which says that if the count of the answered array is equal to 10 then the active form which is Form 4 will be closed and a message will be displayed to the user saying that the test has been complete, and the results form will be shown to the user accordingly. Which is Form 5, and for terminating the loop the use of break; keyword has taken place accordingly. And in the end the index value is returned.

Moving further to Form 5, the Form 5 is the results page in which the result of the user will be shown. The Design of the Results Page, is as follows:

Stage 2: Evaluation between IDE and No IDE

This stage comprises of the discussion between the use of an IDE and Non IDE platform for the creation of an application. In our scenario the Quiz Application respectively. First, let’s start with the definition of IDE.

The Integrated Development Environment is a platform that comprises of all the necessary tools that are required for the creation of a certain application. There are IDE’s available specifically for languages that are currently present in the market. For instance, the use of Net Beans IDE for Java, Visual Studio for C# .Net etc. The tools that are mainly inside the platform are debugging tools, the compiler or interpreter, a suggestion module which suggests errors done by the user and fixing that error accordingly and much more (Travarca, 2016).

The use of IDE, and how is it Helpful.

The use of an IDE can turn out to be really useful while creating an application, for instance for creating the Quiz Application, the IDE played an important role in designing the form, which took place with just the use of certain components present inside the toolbox and dropping them on the window, which makes it really convenient and easy as compared to a Non IDE platform.

The IDE helps in coding as well, whenever some kind of error is encountered that to before running the application, the code is scanned and the suggestion module will suggest and point out any errors if they are found in the code, so that the user can fix the error accordingly. Which leads to code efficiency and time saving as well (Kralev and Kraleva, 2017).

The use of tools in the development phase are really helpful, like the use of a debugger will help one get rid of any kinds of bugs and errors and suggesting them to fix them accordingly present inside the source code, or analyzing the code, cleaning the code, results of code metrics and calculating them etc. can help build a really efficient application. Hence, all of these components that are present inside the application help build the application much better as well as help the user save time as well in the development phase, so that other things can be prioritized accordingly.

This stage comprises information on the debugging process that takes place on Visual Studio 2019 IDE.

The process of removing any kind of issue or defect that the code comprises for correct operationality and functionality of the application taking place with respect to the code that has been written accordingly (MikeJo5000, 2019). The Visual Studio IDE, comprises a debugger that helps in finding out any kind of defects that the code is leading to unexpected outputs and not leading to normal functionality.

• In the initial stage, we will start our application with the debugger being attached to the application process. This is the normal way how the debugging process takes place.

• But, there is no line of code that has been set specifically for examination for that, we are required to double click on the line of code, go to start on the top of the bar and click start or just press f5. With this being done the debugging starts in action for that line of code in the application respectively (MikeJo5000, 2019). The image: https://docs.microsoft.com/en-us/visualstudio/debugger/media/dbg-tour-set-a-breakpoint.gif?view=vs-2019 on the link mentioned makes it easy to understand on how the process takes place accordingly.

• The usage of step commands for navigating the code within the debugger, this leads to detailed information and the execution flow taking place inside the application respectively. For performing this method the use of a short cut key can also take place which is f11 i.e. step info.

Stage 4: The use of Coding Standards in the Application

• The use of Self Commentary Variables: By which it makes it really easy and helpful to other programmers and developers to read and understand the code, if they want to. As well as certain changes and updates can also take place in the code as well. Hence, readability of the code is the major factor that comes under this point (Amann, et.al., 2016).

• Usage of Comments / Documentation of Code: The use of Comments for documenting the code is also one important factor, which is considered to be a best practice while coding. It assists developers to understand blocks of code that has been written and what kind of functionality the code performs at runtime.

• Proper Indentation of Code: This is also one important point, which comes under coding standards. Properly indenting code can lead to easy readability of code. It is essential to indent code to eliminate complexity taking place in the respective code. This mainly comes in to be handy when certain blocks of codes are written like loops or conditional statements like, While Loop, Do-While Loop, If-Else respectively.

Hence, these are some points that have been implemented as coding standards inside the development of the Quiz Application respectively.

The use of coding standards and guidelines are essential, and are required to be strictly followed as they lead to easy readability, under-stability of code. With the help of its use such points can be achieved. As well as this could also lead to time-saving as there are certain possibilities where the code can be re-used for some or other concern, or it could be modified and updated for further more functionality as well. Hence, the use of coding standards is pretty important for a development team to be followed accordingly.

Hence, it can be concluded from the brief explanation that has been mentioned for the development of the quiz application was thorough with all the required code, design and runtime screenshots being mentioned in it respectively. The code was also mentioned in the document in monospace font, as well as briefly explaining the functionality that the code provides to the application as well. The Evaluation of IDE and No IDE, Debugging and the usage of Coding Standards in an organization were mentioned and explained in a very proper and brief manner respectively.