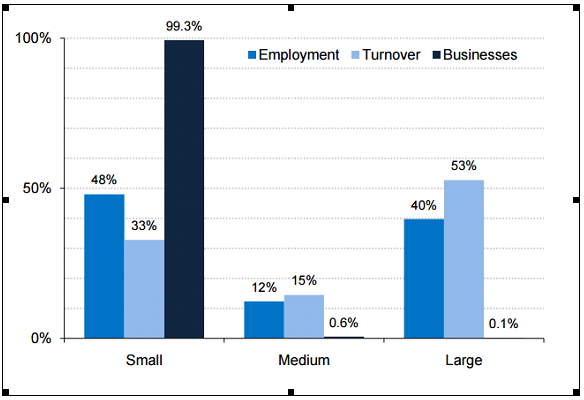 Contribution of different sized businesses to total population, employment, and turnover, at start of 2015(Source- (Anon., 2015))
Of course, SMEs have their issues which include the financial inability to adhere to the complicated administrative and legal framework that the internal market mandates and the inability to compete in a scenario that globalization of production has created. Many SME's are unable to invest towards management training for many businessmen and exhibit unwillingness to hand over control of the management to qualified professionals. The SME's in the UK did have their set of issues by being part of the single market system (Shaw, et al., 1999). Most SME's had to depend on their competencies and differentiators to compete with the bigger companies. They found it highly challenging to adapt to the new environment and had to overlook at conventional methods of survival researching on more cost-effective strategies for production and distribution. The single market uses the common enterprise policy to establish the framework to collaborate the attempts taken by the Member States to support their SMEs, and ensuring that the competition is fair. SME's in the UK may find it expensive and difficult to manage the legislative norms of the EU without being a part of it. (Mulhern, 1994)
The small scale enterprise has done tremendous growth in the UK for the last 7 years because the government has adopted the favourable economic policy for promoting entrepreneurship and startups. Before 2016, the UK market was highly developed and liquidated across the single market. The basic reason was government's financial support and recommendation to small scale enterprise and entrepreneurship. Thus entrepreneurs who function in the single market have access to a bigger market without too much of spending or trade barrier related hassles. In fact, import, as well as exports, work out much cheaper due to tariff removal and there is better access to finance (I. Stefanovića*, 2009). Cross-border transport of personnel, capital as well as other resources can be done in a cost-effective manner with minimal time delays.
UK Leaves the EU – Economy:
GBP: The Free Fall
UK economy is known as among the most stable economy in the world. Somehow their recent decision for leaving the European Union has harmed the profitability and credibility of UK-based companies in the massive scale. The market value of GBP has fallen after Brexit.  Before 2016, the GBP was known and most stable currency of the world but somehow it has affected by the shocking step taken by UK government for not continuing as a member of European Union. The recent study of National Institute of Economic and Social Research has found that the value of Great Britain Pound will remain stable in upcoming years.   GBP fell sharply when referendum resulted in Brexit, and financial markets around the world felt the tremors. After 31-years, history repeated itself on June 27 Monday when pound fell again to $1.28 (Michael Mackenzie, 2016). Sterling was observed to have dropped around 10% in value which is the weakest since 1985. A month before Brexit, $1.50 was a value of the pound, and the moment Brexit was confirmed, an investor was of the opinion that in order to limit the loss only option available to them is sell-off the UK assets. A graph below is explaining the roller coaster ride pound have been through against dollar. 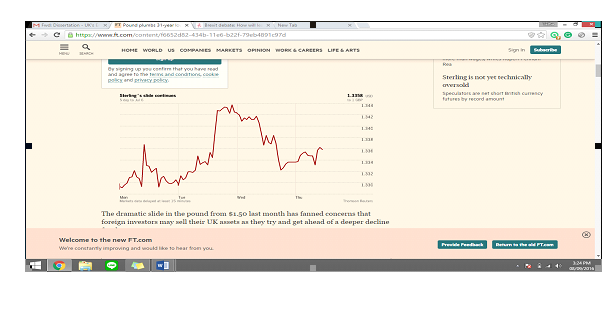 Source: (Michael Mackenzie, 2016).
Mr. Andy Scott, the HiFX economist, said that investors are clearly afraid of Brexit because a market is going through heavy assets unloading following the Brexit. Furthermore, Mr. Scott said that GBP is undoubtedly considered as a high-risk asset now, and if investors become risk averse, GBP will have to go through another wave of pressure as observed over two days prior to referendum (Michael Mackenzie, 2016).
Upon 20% drop in the wake of UK leaving EU, GBP maintained its falling drive against the USD when markets opened on Wednesday, a day after the referendum, resulted in a further drop of 2 cents. Therefore, sterling fell 1.7% to $1.2796. Euro is another currency which had been through tough times, after all, UK is considered as one of the most economically strong countries (Michael Mackenzie, 2016).
In 2015, UK imported goods and services of around £474 Billion ($625 Billion), chiefly from China, USA, Germany, Netherlands, and France. Now, the UK is going to pay an additional amount to these countries to import the same goods and services, and ultimately the end user will have to pay off the high prices. However, the situation is expected to get better in the case of exporters. Since, the currency has weakened, so UK's exporters will be able to increase exports (Tim Bowler, 2016). Maureen Hinton, retail analyst, from Verdict Retail, said that the considerable fall in the value of the pound is directly going to affect the prices of electrical and clothing because UK is majorly dependent on imports when it comes to these items (Tim Bowler, 2016).

LIBOR – Surprisingly Stable
Immediately after the referendum results were announced LIBOR fell by 1 basis point. Labor has not been affected much by the exit because central banks around the world have been rampaged the financial system with low-cost liquidity for years and have proofed the system sufficiently to not be affected by potential shocks which may result in negatively impacting bank funding. This can also be attributed to the fact that the bond market has brought down the possibility of a more stringent monetary policy from the US Federal Reserve and Treasury yields have taken a sharp nosedive (Brexit - Potential Impact on UK's Banking Industry, 2016). High quality global journalism requires investment. Three-month dollar Libor was set 0.6646 per cent following the exit, up from 0.62 percent on June 24, which indicated a rise in cost to banks borrowing US dollars. The rise in Libor will thus prove beneficial for bank loans, which returned 0.8% during August. Past lowballing played a role here when central banks reacted very quickly to stop the panic in the market. Mark Carney, the governor of Bank of England, issued a statement guaranteeing to provide additional £250 billion pounds for the financial systems to support the liquidity (Gavin Finch, 2016).
Impact on Financial Services:
Brexit has influenced the small financial and nonfinancial institution of UK. The financial services have negatively affected by the exit from the European Union. Financial services like passports, employment, and remuneration. Future investment and sales strategies of small-scale industries have fallen. Banking, insurance, and capital market business have affected after exiting from the European Union in the year 2016. I industry and the online market have not affected by the existing from the European Union. Somehow Brexit movement has pushed the national and international companies to modify their business and financial plans. On the other hand, the exit takes off any barriers that the UK may have had in trading with other non-member countries which in turn increases their export potential. Financial services would be adversely affected by the exit than most other sectors of the economy. It is estimated that the UK can save around 10 billion pounds which are the contribution it makes to the single market's budget in a year (Swathi Dhingra, 2016). A slight increase in productivity can happen because of the lax regulatory framework post exit but any major change can happen only after a clearer picture is obtained on the relationship with the single market (News, 2016).