Osteoarthritis (OA) is a disease of the skeletal muscles that is associated with the development of the significant mortality and morbidity. The following literature will focus on the correlation of fatigue in OA. The search of the literary papers was done from the electronic databases by the use of the keywords and through the use of the Boolean operators. The analysis of the selected papers leads to the identification of the three significant themes. The review of the themes identified that fatigue in OA leads to the development of sleep deprivation; depression and inability of perform physical activity and thereby increase the severity of the fatigue further.

Osteoarthritis (OA) is one of the most prevalent types of arthritis that is significantly correlated with high risk of mobility disability. People suffering from the condition generally require help to climb stairs or during walking since their knees get affected in this condition. OA has also been identified to be a multifactorial condition that is predominantly characterized by alterations in the function and structure of the joint (Perrot, 2015). OA can be defined as the pathological and clinical outcome of a plethora of disorders that eventually leads to a functional and structural failure of the synovial joints.Conventionally, OA has also been regarded as a disorder of articular cartilage. The contemporary notion considers that OAcreates an impact on thecomplete joint organ, together with the subchondral bone, ligaments, menisci,capsule, periarticular muscle, and synovium (Palazzo et al., 2016). Some common pathological changes that occur during OA comprise of destruction and progressive loss of the articular cartilage, development of osteophytes, subchondral bone thickening, degeneration of menisciand ligaments, inflammation of the synovium, and hypertrophy of joint capsule.Some of the common systemic factors that result in an increase in susceptibility of the joints to OA comprise of an increase in age, nutritional deficiencies, and female gender. Amid individuals who are identified to be at risk, a range of local mechanical factors facilitate the disease progress. Some of these factors are weakness in muscles, misalignment, and modifications in the structural integrity of the joints. According to Fukutani et al. (2016) people suffering from OA often have to put in extra physical effort, with the aim of conducting the activities of daily living. This commonly results in fatigue.

Moreover, inflammation in the joints that is brought about by cytokines, the chemical mediators also results in fatigue. This fatigue is commonly described as a form of exhaustion and tiredness and creates a substantial negative impact on their physical functioning. In other words, fatigue is one of the most prevalent and non-specific sign that is commonly experienced by people suffering from OA at one point in their lives (Fawole et al., 2018). It relates to the subjective and enduring sensation of exhaustion and generalised tiredness and is typically conceptualised as weakness, weariness, and decreased energy. Hence, often fatigue has been identified as categorised as a secondary or primary compliant of the disease. Owing to the high prevalence of fatigue related symptom in OA, there is a need to conduct a literature review for correlates of fatigue in OA. With the aim of extracting articles, search terms were fed in the two electronic databases CINAHL and MEDLINE. The table given below highlights the keywords and search terms used, limitations, databases searched, and the inclusion and exclusion criteria. 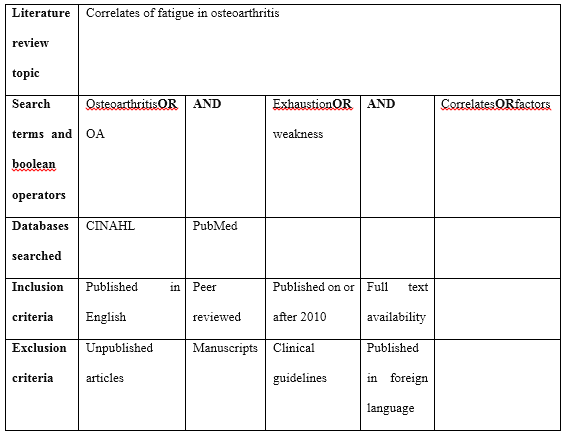 Fatigue and physical activity in OA

Murphy et al. (2013) tried to assess the association between momentary fatigue and subsequent physical activity amid OA patients and adopted a quantitative approach for the same. The researchers recruited participants though advertisements and flyers and subjected them to questionnaires, performance assessment and home monitoring. The findings suggested that fatigue was the most significant marker of decreased physical activity amid OA patients and only functional mobility weakened the association between fatigue and activity. Moreover, the association was found to be strongest for people having high functional activity. The research is particularly important to the research question since it helped in establishing momentary fatigue as an important and robust variable, associated with reduced physical functioning of the OA patients. However, the findings could be generalised only to OA patients who suffer from mild to moderate fatigue symptoms. Moreover, there might have been errors in physical activity measurement.Likewise, Novaes et al. (2011) also argued that fatigue in OA patients is significantly correlated with disability of the patients. The researchers elaborated on the fact that fatigue is generally identified as alow vitality, subjective symptom reported by patients as exhaustion, weakness, weariness, tiredness, and depleted energy,which results in areduced capacity for mental and physical work. The researchers tried to evaluate the association of fatigue with disability in OA patients and pain in rheumatoid arthritis (RA) patients. Following the recruitment of 20 patients each suffering from the two diseases, they were assessed using the Patient Global Assessment, visual analogue scale, and Health Assessment Questionnaire. It was found that there fatigue was substantially more amid OA patients, compared to the other disease. Additionally, there was a correlation between Health Assessment Questionnaire with fatigue visual analogue scale amid OA patients (r = 0.54; P < 0.05). Importance of the findings can be accredited to the fact that it helped in identification of the different correlates of fatigue in OA and RA.

Fatigue and depression in OA

Castrejon et al. (2016) tried to characterise the correlation of fatigue with different variables amid patients suffering from rheumatic diseases. All patients had been subjected to the MDHAQ, VAS, RheuMetric checklist, and a routine assessment of patient index data (RAPID3). The researchers found that there existed significant positive correlation between fatigue and depression amid OA patients. However, joint pain, a common symptom of OA was found to affect the relation between depression and fatigue. The major strength of this study was that it established depression as a correlate of fatigue in OA. This was in accordance to the findings presented by Hawker et al. (2011) who conducted a longitudinal research for explaining the pain-depression association in older adults diagnosed with OA. Adoption of a longitudinal approach was correct since they are generally effective in assessing inconstant patterns over time and are known to have greater power, in comparison to cross-sectional studies, in relation to exclusion of individual differences and time variants. The researchers conducted telephonic interviews at the community cohort and found that OA pain acted as a strong predictor of disability and fatigue, both of which anticipated imminent depressed mood. The significance of the research was that it identified the interrelation between depressed mood and fatigue. 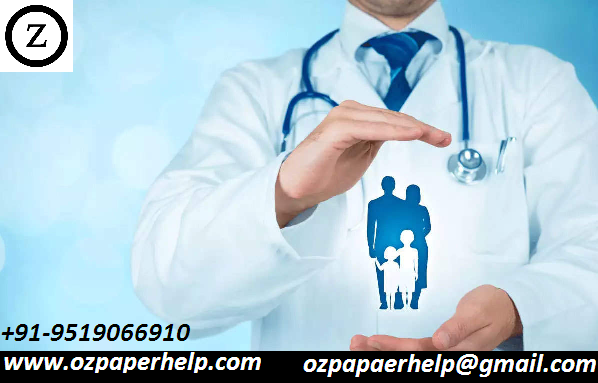 Fatigue and sleep quality in OA

Taylor‐Gjevre et al. (2011) identified the impact of poor sleep on quality of life, mortality, morbidity and pain perception. With the purpose of assessing the elements of sleep quality and sleep fragmentation, the researchers invited OA and RA participants to fill a self-administered questionnaire. It was found that SF‐36 mental component summary and mHAQ were the most significant predictors for increased PSQI scores amid OA patients. In addition, responses collected from the OA patients also manifested abnormalities in subjective sleep assessment, sleep duration, sleep latency, daytime dysfunction, sleep efficiency, and augmented usage of sleep‐aid medication. 49% OA patients considered the need for using washroom as the most common reason behind sleep disturbance that resulted in awakening and subsequent fatigue. Similarly 45% OA patients also considered pain as a significant contributor to awakening and led to fatigue. The findings are important since fatigue was correlated with abnormality in sleep quality. Parmelee, Tighe and Dautovich (2015) conducted a cross-sectional and longitudinal association of the osteoarthritis (OA)-related pain or disability along with sleep disturbances and development of the depressive symptoms. The authors surveyed 367 individuals who are diagnosed with OA by the physicians and are complaining about disturbances in sleep, pain in joint, depressive symptoms along with poor functional outcome in the quality of life. The same test was again conducted after one year over 288 samples in order to produce a comparative analysis. The baseline data indicated that OA leads to disturbance in sleep attributed to pain. The lacks of quality sleep at night increase the level of fatigue and depression. However, no significant relationship was establish between the developed of disability and OA. Lack of sleep and pain is the main mediator of the development of the depressive symptoms among the OA individuals (Parmelee, Tighe & Dautovich, 2015). The authors thus confirmed that there is strong relationship of OA and lack of quality sleep at night (sleep apnoea) and thus leading to the development of the depressive symptoms and fatigue. One of the limitations of the study that has been selected for this review, the study assessed the quality sleep, severity of depression and pain with the help of the self-reported questionnaire. Parmelee, Tighe and Dautovich (2015) stated that self-reported questionnaire is biased and thus might lead to the development of the biased results. Moreover, during the follow-up session, the after one year, the sample size got reduced and thus further limiting the chances of the generalised results and increasing the probability of biased results. One of the significance of the results is it helped in understanding the association between the OA ain followed by sleep disturbances and development of fatigue and depression.

The review of the articles helped in a detailed understanding of the mechanism of the development of fatigue from osteoarthritis. The current evidences showed that the there is a potential correlated between the fatigue and OA. Development of the OA is associated with severe pain in the joints. Increase in the joint pain hampers the course of the activities of daily living, increase the sense of depression and hampers the overall sleep at night. Depressive mind along with sleep apnoea increase the sense of fatigue further. However, the severity of fatigue varies with the type of osteoarthritis and age of the individuals.