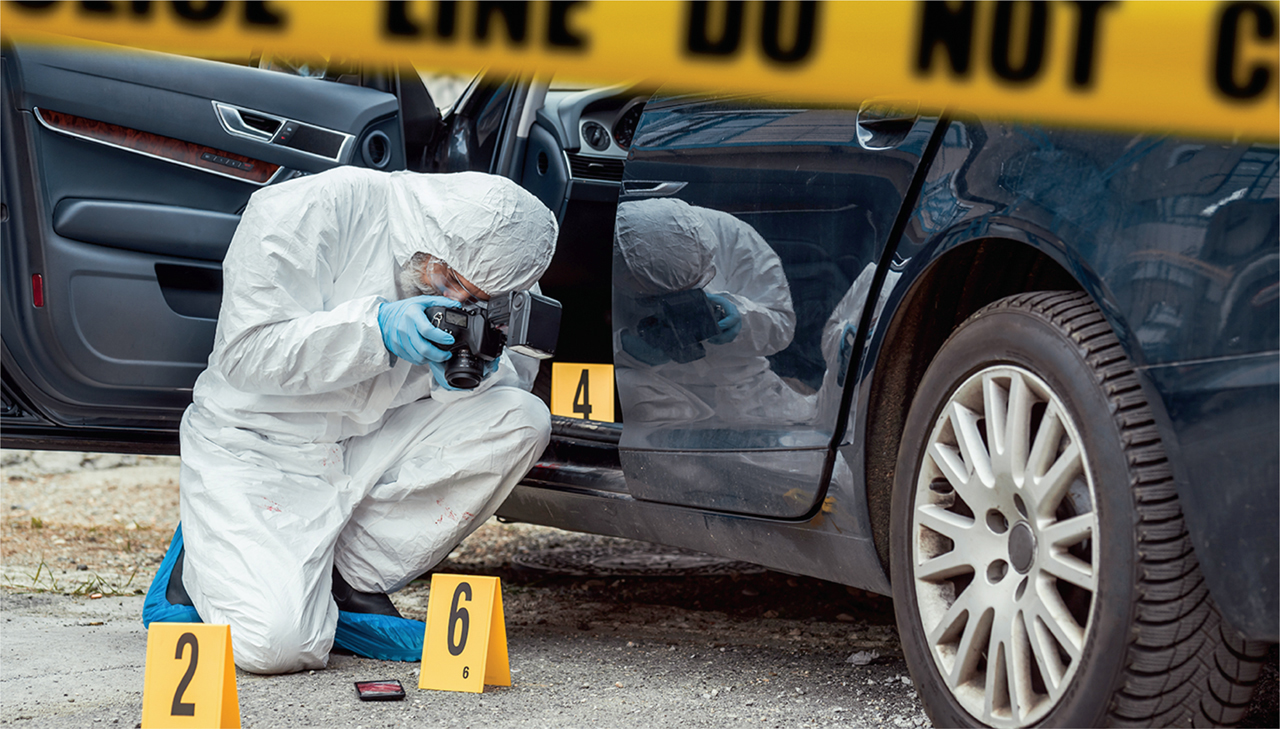 What are the main elements to consider and what are you covering in the essay? Write paragraph explaining what you will discuss in this essay.

Forensic science is also considering as criminalistics in which science is applied in criminal and civil laws while the investigation process to identified appropriate evidence for resolving the complex cases. Simply, cross-contamination means transferral of substantial between two or more bases of biological evidence such as; inadequately accumulating physical proofs like; blood sample of one is mixing with another sample in order to contaminate the both (Edmond and et. Al., 2015). Therefore, this project will outline the role of cross-contamination in forensic science and its importance with the help of suitable examples. Along with this, reflect the process which is used for preventing cross-contamination and consequences of poorly managed. Thus, the main objective of this report is to cover the significant elements of the cross-contamination process by explaining the concept, its types, differences, and ways for managing the differences.

As per the article of Hayden B. Baldwin and Cheryl Pushkarich, problem of contamination related with physical evidence is painful which has gained attention in various criminal scenarios. Simply, contamination in forensic science means making impure to the evidence by mixing other component and this kind of activity incurred at crime situation in various forms such as; while packaging, gathering and transportation of proves in safe laboratory.

On the other hand, Danilo Alfaro, (2019) states that Cross-contamination is a kind of fancy name which is used when bacteria transfers from one evidence to another and contaminate the other one which is not. It’s not just some bacteria that move from one place to another whereas it would also denote as a virus or type of toxin. At the same time, tracing evidence such as; hair, fibers, paint, and blood which transferred from one element to another raises the issues of cross-contamination where the foundation of tracking proofs identified on an important product is undefined. Contamination is an overview of anything to a situation that was not present earlier which means, trace items have added into criminal activities after the crime happening. This can have incurred before, during, and after specialists have acquired the samples of proves from a specific situation. However, these kinds of contamination activities are accomplished by criminals and used by the culprit to protect after committing major crimes such as; rape, sexual harassment, or murder. In fact, it’s a modern method which is used by advanced society to prevent culprit from punishments and sometimes people use this for taking revenge.

On the other hand, cross-contamination can also have incurred in human daily life in the form of bacterial transfers from body to body through infection but this action is not intentional whereas criminal use biological samples for intentionally just to harm others (Benton and et. Al., 2010). According to the philosophy of Professor Locard, when two different objects come into close relationship with each other then it automatically exchanges the traces proof. For example; forensic DNA assessment has gained powerful attention in criminal scenes and become outstanding investigation tool. Therefore, technology of DNA is utilized in criminal test centre across the nation which acquired samples that are small in size or corrupted as well as Xerox the identified DNA for providing a bigger enough sample for examination. Additionally, conditions of surrounding also playing an eminent role in contaminating the evidence at criminal scene such as; wind, sun, rain, snow and temperature is having an ability to destruct the proofs. For example; if there is flow of blood at outdoor surface and rain instantly came then it automatically dilutes the blood due to which testing of blood become impossible for forensic science scientist.

2. Different types of CC, differences and techniques for managing the differences?

– Link all these points to forensic science, refer back to the essay question. -How do these issues happen during an investigation?

Contaminated materials (evidence) is mixed with other item while packaging.

Specialist of forensic science are using the place which are contacted with a contaminated surface.

Contamination can also take place while transferring of proofs in secure laboratory.

During collection of evidence when one component which is already contaminated come in contact with those which are not.

There are distinct biological toxins are present which linked with specific plants, mushrooms, and seafood in which Histamine is a most noticeable toxin that yields from pathogens as well as incurred when fish is time-temperature abused. This can mainly have identified in tuna, mackerel, mahi-mahi, and bonito. Apart from this, Ciguatera is another type of toxin which is very common and ultimately transmitted when big fish consume a smaller fish, and then it is used by human beings (Williamson, 2012). However, these type of cross contamination might face by forensic science when the materials are transferred from one laboratory to another.

According to this element, human being’s or experts of forensic science requisite to appropriately utilized the regular items which consume chemicals such as; cleaners, sanitizers, and polishers because these products might contaminate the evidence which is managed by them in laboratory for testing to other item which automatically cause damage proof (Beltramo and et. Al., 2017).

These types of contamination identified when objects related to physical mainly find their path to get into identified evidence such as; dirt, hair, bandages, shavings materials of metal pieces, jewelry henceforth. Additionally, bones of fish are also known as physical contamination and these things might cause fatal damage like; cuts, dental damage, or choking (Sundar and Rowell, 2015). These above are some common contamination types which is incurred in criminal scenes and create problem for forensic science team while performing their assigned job role. Some of evidence which is used by forensic science for determining the correct proofs for supporting corps to reduce criminal activities are; fingerprints, DNA testing, hairs, stamp of shoes, blood sample and so on.

3. What process is used for preventing cross contamination in forensic science?

Forensic science is playing a major role in supporting corps to identify the correct proofs related to criminal activities which might destroy because of cross contamination. Simply, Contamination is a term which shows the presence of unwanted materials like; dust particles while the production process in the form of bacterial and becomes a major reason for an individual illness. Therefore, forensic team states that this problem can incurred while criminal offences just to hide the truth by misusing the proofs through contaminated process. However, most common types of contamination are; chemical, physical, and biological which influence the person as well as entire forensic science in a negative manner. Thus, it is essential to take the necessary steps or follow suitable procedures for reducing the probabilities of cross-contamination (Newton, 2013).

Process for eliminating the problem-

Eradicate the source of the material and required to eliminate the contaminant carrier such as; minimize the participation of human beings, control the utilization of equipment, control the air utilization and water.

It’s important to minimize the water as carrier such as; water is somehow topmost source for cross-contamination due to which an individual need to regulate and protect water pollution. Along with this, the requisite to maximize the use of preventive measures like; devices related to filtration, distillation, or reverse osmosis or UV treatments (Belchior and Andrews, 2016). Additionally, Air as a carrier can reduce by controlling the flow of air via AHUs, prefer the usage of airlocks and install the HEPA filters.

Apart from this, it is essential to follow some necessary tips as a process for preventing cross-contamination is mentioned below-

It is significant to test one material for protecting from cross-infection, acquire a sample in a room which is full of appropriate air control system in order to protect infection via airflow, utilization of corrective tools designed for the item, need to make sure that equipment is properly clean, regularly check the process of cleaning to make it more effective and it’s important to consider the daily monitoring process for water to analyze the presence of a microbial system as well as ignore the charging of two materials at a single duration.

Additionally, this action can use by criminals to perform their wrongful activity smoothly intentionally but sometimes this can also have incurred unintentionally in the form of environment contamination that cannot be controlled by police because temperature is uncertain which can change at anytime (Berketa, James and Lake, 2012). But still, corps and specialist of forensic science need to consider necessary things for preventing the happening of cross contamination are- It’s important to wear gloves and change them frequently, need to prefer disposable equipment’s or clean it thoroughly before handling the sample as well as after too, ignore to touch the area where DNA is existing and ensure that there is no conversation is taking place over the evidence for controlling the possibilities of sneezing or coughing in that area otherwise identified proofs might get destroyed via cross contamination. Additionally, law enforcement is also using technology for detecting and solving the criminal offences which are taking place in existing moment such as; Global Positioning Systems supporting police officers to resolve the cases.

4. What happen if cross contamination is poorly managed? –

write about the effects it has on a criminal case, write paragraphs for each point below: