In this data anlysis we see that there are around responses of 300 sample size or the participants that are present in the survey. The valid data is used for this data analysis where all scales of grading is performed. Based on the sample data sets and the three data analysis on multiple regression among the Predicting Forgiveness and Reasons of Forgiving (N = 300)

Across the three eperiments / analysis performed

Multiple Regression of Forgiveness and predicting the reasons for Forgiveness

Here the curve estimation is performed in the analysis and we see that are made with different models like "linear and S-curve".  The data shown in the table represents a linear regression model, which is strongly needed (Plonsky and Oswald, 2017). The R square value is considered to be a goodness of fit measure and also indicates a similar "percentage of the variance". The F test, which is made over the significances and able to indicate the "linear regression model," is fit to contain no "independent variables". The highest F value is for "Masculinity" with 8.06, and the lowest is 0.28 of "Uncertainty Avoidance". It is also considered to be the ratio of the sum of squares divided by the "error mean sums" (Fernández-Macho, 2018).  The parameter of df in the regression statistics reveals to be a predictor variable. It also has an estimated parameter where the sample size minus the parameter is estimated. The valuation of Df is 2297 for all the factors in the statistics.Here the The R2 value for table 2 on the analysis of the Predicting Forgiveness and Reasons of Forgiving (N = 300 is considered to be 0.01,0.03, 0.01,0.00 respectively . The R square value is considered to be 0.10, which explains a specific endogenous. The value of collectivism and Masculinity is strong enough. 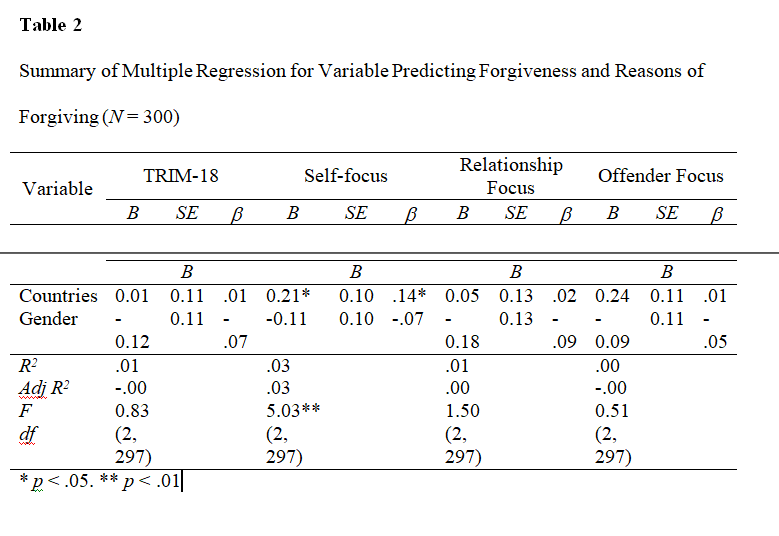 Multiple Regression of Reasons for Forgiving

The specific statistical measures also predict the "goodness of fit" to check all the residual plots that are present in the graph. The residual plots easily reveal the data patterns and are able to indicate some biased results which are more effective than numbers. The evaluation of multiple regression fits the data where the difference is observed that exists between the observed values considered to be small and unbiased The R square value for "TRIM-18, Self Focus, Relationship Focus, and Offender Focus" are 0.01, 0.03, 0.01, and 0.11, respectively. The R values present between 1 and -1 are considered to be inclusive and also measure different proportions of variation which are present within the dependent variable. It can also attribute some of the independent variables which have the highest R square value of 0.11. It mainly determines the statistical measure, which is always fitted to the regression line. 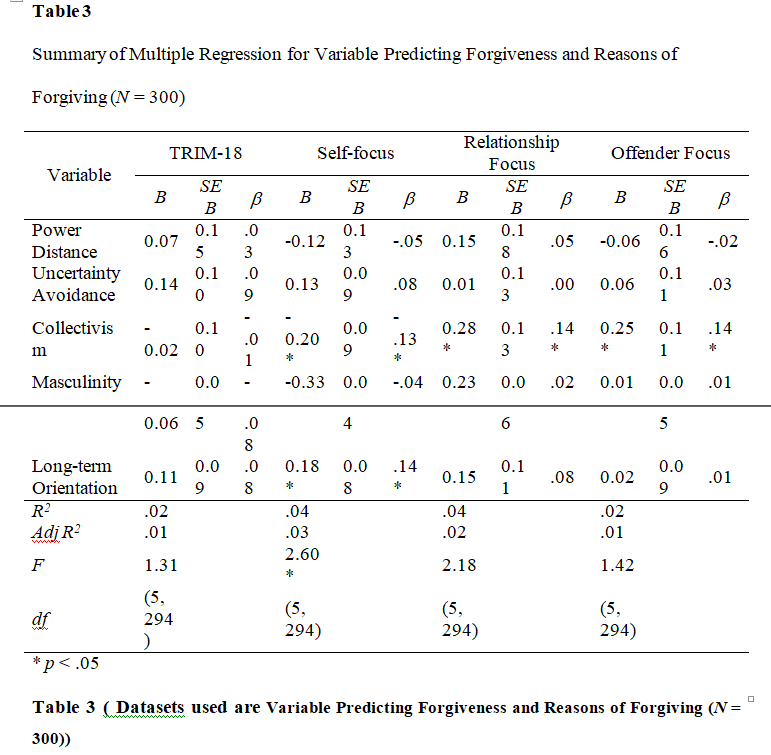 F value shows us maximum among the self-focus as the category choosen among the 4 choosen categories  with the B collectivism as 0.20 highest among other categories

This type of model explains all types of variability that are present with the response of the data. The value of F is mainly determined as if the "null hypothesis is true" than F has the value, which is close to 1.0. The highest F value is 2.60 of the factor "Self-focus," and the lowest is 1.31. The F test is mainly conducted through the Anova test (Čeh et al. 2018). 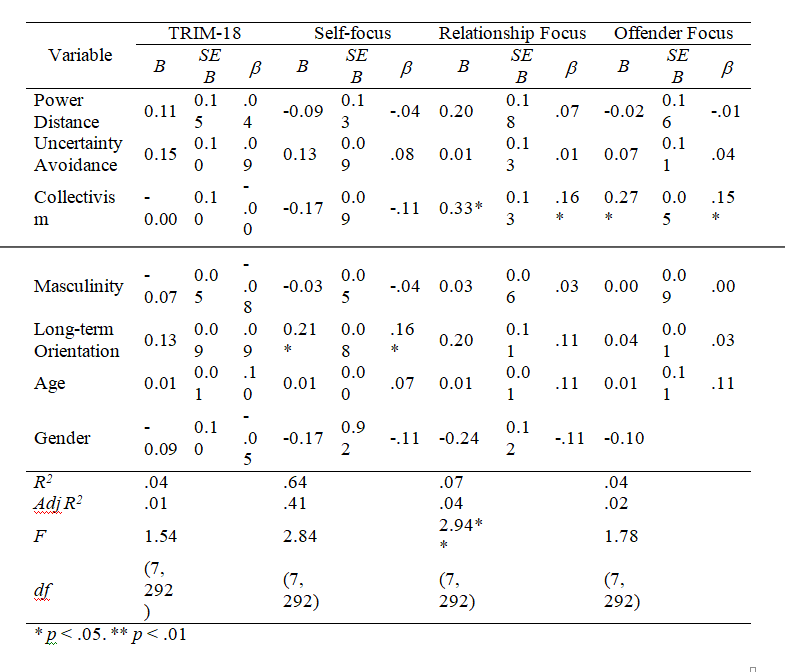 The highest beta value is based on the Trim 18 category, which has 0.90. The main F test is used for the "F distribution," which is made under the null hypothesis that will be fitted to a definite data set. It will identify the models which will be fitted for best based on the data sampled. We see here that when F test is performed , the population of the two variances is taken as equal.