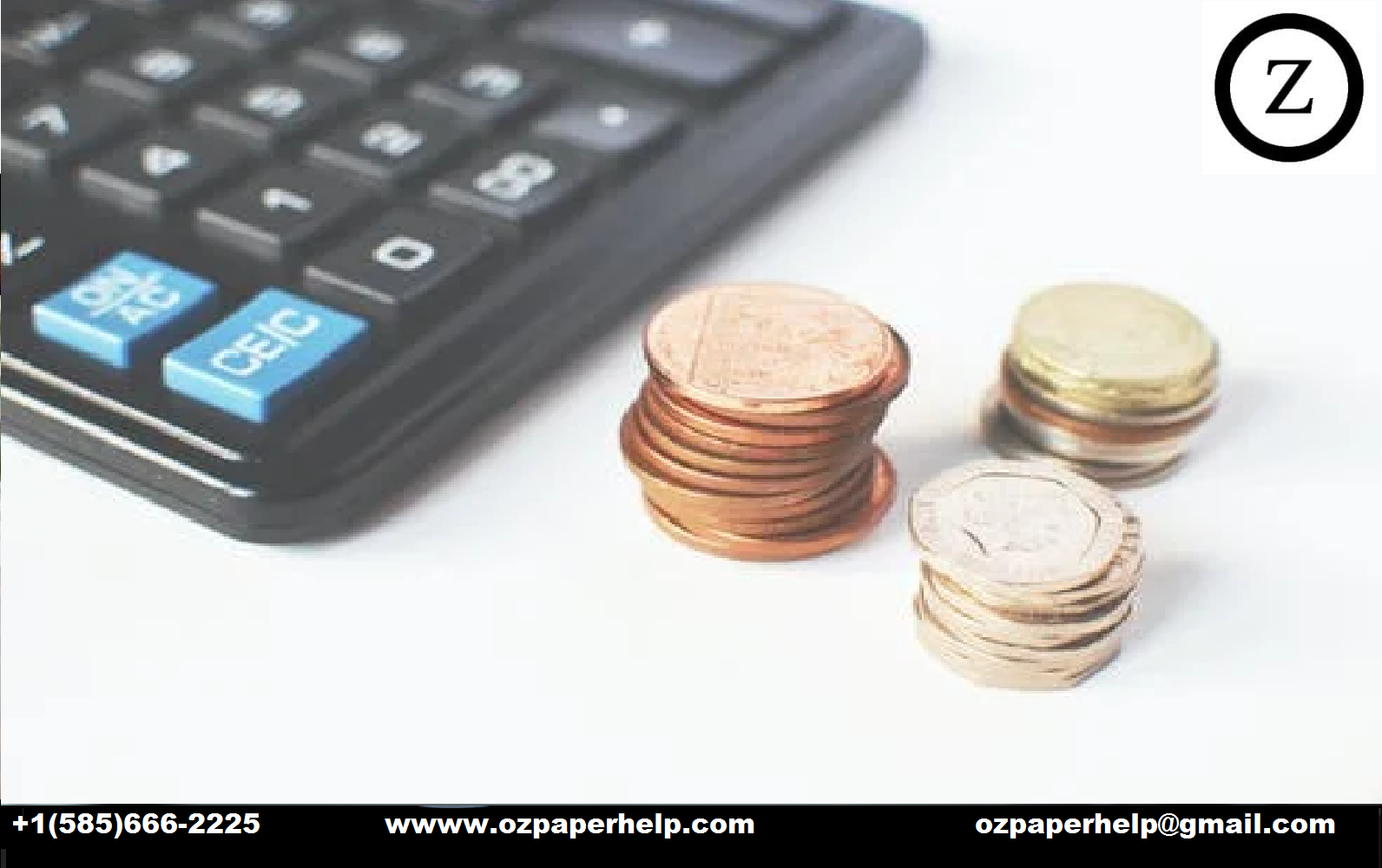 Introduction
In the developing industrialization environment, every company wants the systematic record of the daily transaction for making the work hassle free and fast. The accounting standard is applied for recording the company transactions systematically. The WESFARMERS requires maintaining the three main principle accounting of financial statement (Income statement, Balance sheet and Cash flow statement). The detailed report is discussed on the consecutive three years cash flow of Wesfarmers and its transaction related to the income tax and the tax assets payable by the company in the following year. The reason for recording the deferred tax assets and liabilities in the balance sheet has also been ascertained in this assignment.
2.Cash Flow Statement
The cash flow statement keeps track of the inflows and outflows of the company on the weekly, monthly or yearly basis.
I.  The   changes in cash flow of three consecutive year
According to Balashova et al. (2015, p.153) After reviewing the last consecutive three year of the Wesfarmers cash flow statement, it is recognized that the net increases in the cash by the company was $402 in 2017,  ($100) in 2016 and $ 734. Total current assets were $9667 in 2017, $9684 in 2016 and $9093 in 2015. There are not many differences seen in the current assets transaction. The changes observed in the three-year cash flow statement are the growing percentage of the short-term investment by Wesfarmers by 89.47% in 2017 which declines to negative by -41.62% and -46.60% in 2015. The total assets remained by Wesfarmers at the end of three years was 2.77% in 2015 and thus decreased by 0.50% in 2016 to 1.61% and then increased by 2% to 3.09% in 2017. The assets total growth was -1.35% in the year 2017.
II. Analysis of Investing activities, Financial activities and operating activities of Wesfarmers
Investing activities - The expenses on the fixed and long-term assets by the company determines the investing activities of the cash flow. According to the listing items in the cash flow statement the long-term investment screens, gross investment on plants and equipment are $9440 in 2017, which was lower in 2016 by $9612 and higher in 2015 by $10,205. The accumulated depreciation made by Wesfarmers on plant and machinery was $9256 in 2017 decreased by $8478 in 2016 and lower by $ 2000 in 2015.

Financial activities - According to Lewellen and Lewellen, (2016, p.1135), the expenses on the shares and dividends by Wesfarmers and selling of the company shares and equity determines the financial activity of the company. The net cash flow in the financing activities by Wesfarmers was -3771 in 2017, -1333 in 2016 and -3294 in 2015. The borrowing proceeds, repayment and the equity dividend paid makes up the investing statement of Wesfarmers.
Operating activities - the operating activities determine the net plan to implement the new project. The operating activities of the Wesfarmers in the consecutive three years indicate the receipts from the customer. The net operating cash outflow form Wesfarmers in 2015 was $1898 has increased by $2000 in 2016 to $3365 and $4226 in 2017.
Net changes observed in the cash flow activities were $1356 has drastically decreased to $100. In the year 2017, the Wesfarmers had a positive impact on the activities by $402 (Gale et al. 2014, p.58).
3. Comprehensive Income statement
The income statement includes the sales, tax expenses, discounts, financial cost and the share of profit by the company.
III. Explaining   the items reported in comprehensive accounting
The comprehensive financial statement includes the component of sale, expenses, taxes, and interest. The share of profit attributed to the Wesfarmers partners was $2873 in 2017. The reserve funds of Wesfarmers were $2 million where the unrealized loss incurred by the company of $(136) has been identified. The realized cost of losses recovered and transferred ($92) to net profit. In the comprehensive income statement, the tax effect and re-measurement loss on the planned profit would not be included in Profit and Loss account. At the end of the financial year, the attributed profit amount shared by the members of Wesfarmers was $2891.
IV.   Discussing the reason for including such item in the comprehensive income statement
The elements recorded in the comprehensive income statement are infrequent in nature and does not incur usually. The gains from changes in the stock market are recorded in the comprehensive account as inflated earnings which could probably be deflated in nature. The assets and liabilities of Wesfarmers in the comprehensive income statement is $2 million which was translated at the exchange rate of the Australian dollar as per the rules of the balance sheet of the company. The income statement is also translated at the exchange rate to the average. This differences determined from the exchange rate is counted directly in the element of the equity of the Wesfarmers (Lewellen and Lewellen, 2016, p.1135)
V. Explaining the reason for not including such items in P/L account
The losses and gains from the derivative components, the unrealized securities debt, gains and losses from pension and retirement, foreign exchanges of currency are the elements that occur rarely from the smaller sector of business. The overseas operating affects the company performances thus it is not accounted in Profit and loss account. The corporate accounting standard ascertains the income statement of the organization by accepting the rules of principle under General accounting standard Act. Thus this does not permit the derivative income and expenses to record in profit and loss account of the company for showing extra expenses and retrieving profit there from (Gale et al. 2014, p.58).
4. Income tax accounting
VI. Explain the firm’s latest tax expenses 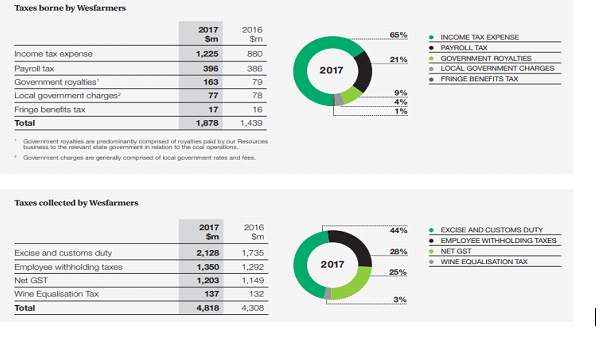 The figure given above indicates the tax borne and collected by Wesfarmers in 2017. The tax is contributed to the Australian state and federal government. The total proportion of Wesfarmers in global taxation payment is $2.1 billion in the year 2017. The company collected $4.8 billion which is directly attributable to the Pay As You Go (PAYG). The payment of the collected tax is made on the behalf of the Australian government for wine equalization tax (WET) and GST on excise and customs duty. Increase in the rate of customs duty has increased the payable taxes of Wesfarmers in 2017. The table comprises the tax paid and collected by Wesfarmers in 2017 is $4.8 billion and 44.3 billion in 2016.
VII. Discuss the reason, the tax expense is similar to the company tax rate
As per Dechow and Tan, (2017, p.45), the private limited company is not fully attributable to the rate of income tax as applied to the joint venture organization. The rate of tax is still being imposed on the corporate sector by the government for operating for the motive of self-profit within the state. The imposition of a rate of tax is on the profit made by the company in the taxable financial year. This kind of taxes is imposed by the government of the state which varies according to the different state and location. The lesser rate of tax imposed on the organization would bring higher profit rate and enhances the environment of economic.
VIII. Explain why deferred tax assets and liabilities are recorded on the balance sheet
The deferred asset of Wesfarmers is $971 in 2017 and 1042 in 2016, it accounts for the difference in taxes remained unused, or taxes carried forward losses. The deferred tax is the taxable income which is available to the company for future use. The deferred tax is applied to the assets at the rate of tax when it is recoverable or on the settlement year of the liabilities. The Wesfarmers has an unrecognized profit which is carried forward as a capital loss, which could be offset by capital gain. The deferred tax of the company in 2017 is $127 million and $130 million in 2016, the total loss of capital (Maigoshi and Kamardin, 2017, p. 14).
IX. Elaborate the company income tax or current tax assets payable by the company 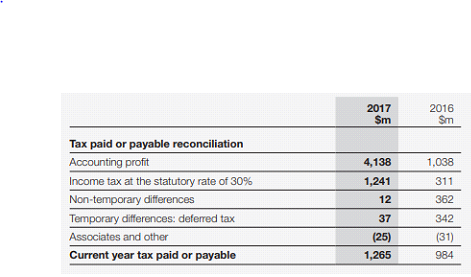