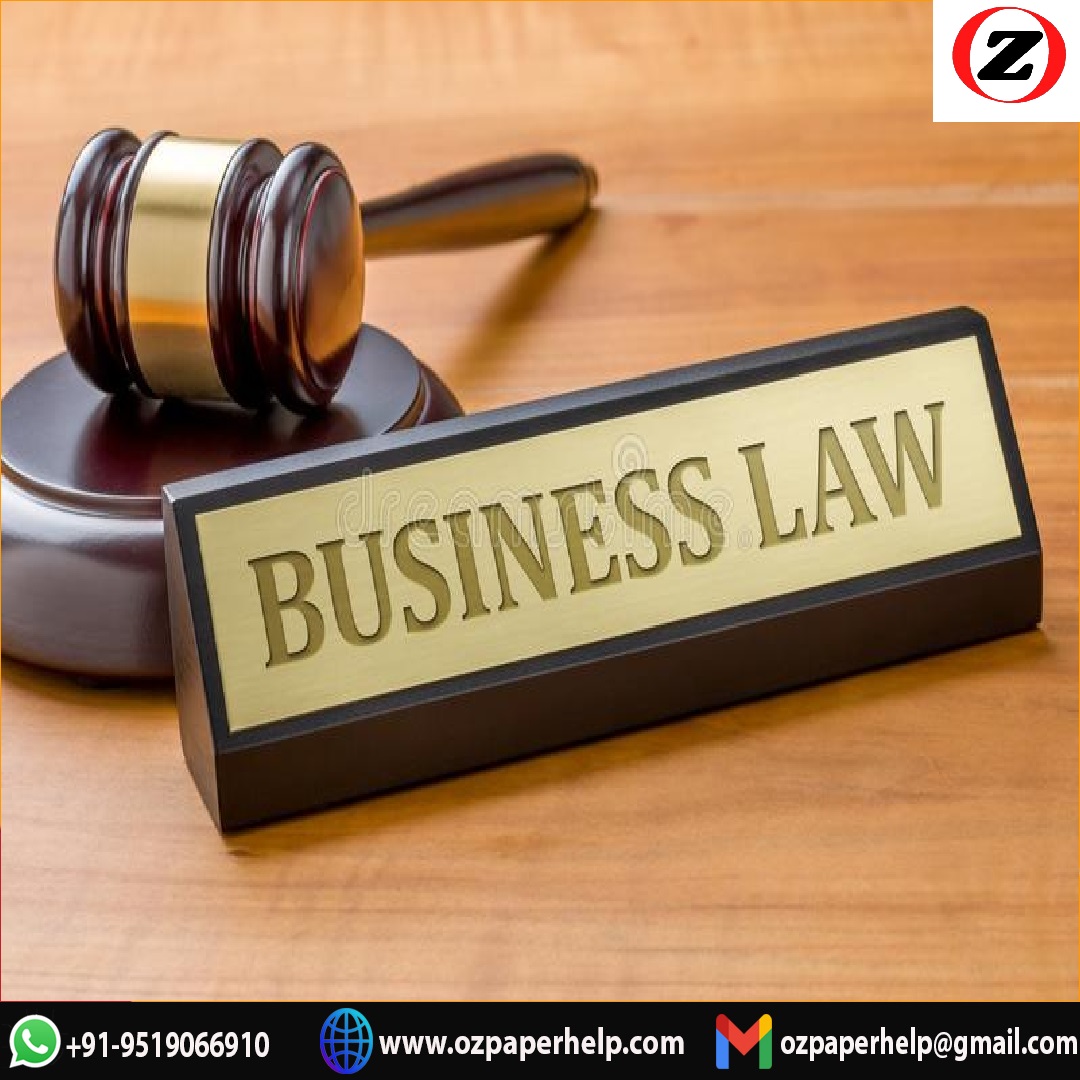 Law of torts in business is significant way for defending against any financial loss due to any unlawful actions of others and also limits the business ability to operate as normal. There are various forms of that can impact on the business operations of companies. Torts can be defined as action of civil wrongdoing that influences the person and business. The term of tort is extracted from the Latin words tortum which means wrong. The law of torts provides a legal application for acquiring remedy to the wrong action of individual or any corporate bodies which damage the interest of any third person. The main elements of the law of torts are to procure remedies to people who are the victims of another person's action. The law of torts avails its jurisdiction over any breach of duty of care, negligence, loss of wages, defamation, medical negligence, vicarious liability and many others which acquire any civil wrong in the society. The present essay argues whether law of torts is important for the business operation or not.

The importance of Tort Law to business operations

Monetary compensation has been main punishment which consist of larger part of the torts cases which is related to Business Corporation. According to Paterson and Bant (2016), there are three types of business cases which come under the jurisdiction of law of torts such as:

Restraint of Trade: In restraint of trade cases, the financial loss may not cause immediately, however, the normal continuous flow of the business is disrupted. This might lead to loss and restraint the process of trade. According to Holly (2018), the expansion of business is limited which creates a reduction in financial loss in the market. The law of torts procures remedies for the restraint trades in the market.

Theft of Trade Secrets: When one individual takes potential information from a business with an intention for gaining competitive advantages through an unethical practice. This can lead to defamation for the business. As suggested by Whincop (2017), the theft of trade secret also creates an offence under the Intellectual Property Right. Moreover, it lowers the capabilities of the business that has been victimised of this action. Trade Secret is the internal facts for the growth of company and gaining competitive advantage in the market (Cassel, 2016). Therefore, stealing of trade secrets reduces the ability of business organisation to acquire competitive advantages in the market.

Fraudulent misrepresentation: When contract taken place between two parties although the information of the agreement has been false and one party is misrepresented by the other party to the contract. As mentioned by Stickley (2016), misrepresentation of the data creates misunderstanding and act of fraudulency in the methods of business and creates an adverse impact on the growth of the company. It also creates defamation and maligns the reputation of the business organisations and reduces the growth in the market of Australia.

The Civil Law (Wrongs) Act 2002 provides the legal remedies for the business or personal entity under the law of torts. Section 5 of the Civil Law (Wrongs) Act 2002 provides the protection for the individuals doing any action under the act of honesty and good faith which amount to damages to the other person (Legislation.act.gov.au, 2018). However, the act does not protect individual if the incident happens under the ambit of third party insurance. Moreover, the individual acquire good knowledge to acquire solution for the incident.

On the contrary, Section 5, Sub Section 3 of the Civil Law (Wrongs) Act 2002 states that individual acquires good knowledge about incidents although the protection acquires if the individual possesses to treat the other person and cure (Legislation.act.gov.au, 2018). Section 6 of the Civil Law (Wrongs) Act 2002 defines the community organisation as a corporation that directly communicate with the general through volunteer (Legislation.act.gov.au, 2018). Law of Torts is dealing with various misconducts encompassing negligence, malpractices and torts in business which involves both mens rea and inappropriate interference of any other persons. This significantly disrupted the business relationship and acquires a loss of potential clients, competitive advantages, opportunities for business growth and other joint ventures in Australian market.

One of the famous regarding negligence influencing the business organisations is Kerle v BM Alliance Coal Operations Pty Limited [2016] QSC 304, the honourable Supreme Court of Queensland held mine operate along with labour hiring agency and a host employers as liable for the car accident occurs to the workers while returning from work to home after completion of four consecutive 12 hours night shift (Queensland Judgments.com.au, 2016) . After investigation in the present given case, it has been analysed that plaintiff was fatigued due to stressful and consecutive night shift. The honourable court alleged that mine operator has been responsible to understand the working balance of each employee. However, the argument provided by the defendant does not satisfy the court. Defendants argued that the length of shifts limits up to 15 hours, although, no evident has been identified by the court. Moreover, it was claimed by the defendant that transportation was provided for employees after their roster. However, it does not acquire any supportive evidence to the fact (Stickley, 2016). In further instances, it was held by defendants regarding resting room for their employees. On the other hand, the plaintiff did not acquire any information regarding it. The honourable Supreme Court identifies breach of duty among the defendant which damages the plaintiff. This significantly impacts on the reputation of the organisation. Similarly, any breach of duty of care creates impacts on the value position of any organisations. Therefore, law of torts creates negative impact on the business organisations and reduce the competitive advantage in the market.

In the case of Roberts v Westpac Banking Corporation [2016] ACTCA 68, the petitioner has been facing post traumatic disorder as he became a victim of bank robbery (Wolters Kluwer Central.com.au, 2016). The petitioner states that the following protection should be provided by the defendant as causes of his mental condition. However, the Australian Supreme Court denotes that the bank owed no duty to the customers regarding their protection from the armed robber’s action. In the initial phase, the petitioners argued that the defendant is responsible for the hooliganism of the robber. Moreover, he claims that the primary court does not paid attention on him. On the contrary, the honourable court defines that the primary judge was correct regarding its findings as Westpac Banking Corporation does not acquire any control over the offenders and protection of the customers. Hence, there has been no breach of duty care identified from the sides of the defendant.

Similarly, consumers can claim the protection of their materials under the law of torts from the trader. However, after the delivery of the goods of service, the trader cannot be liable if the damages caused to the goods through any external forces. Therefore, the consumer claim according to the Civil Law (Wrongs) Act 2002 can mitigated which has not been performed by the business end to the customers. The business organisation does not provide any liability regarding the protection of consumers from the action of any external forces.

In the case of In the case of Hardie v The Herald and Weekly Times Pty Ltd & Anor [2016] VSCA 103 the petitioner is the owner of strip club named “Club Rawhide” sued the defendant for procuring defaming articles which states that the club is the venue for confidential meeting between corrupt police and motorcycle hooligans (Wolters Kluwer Central.com.au, 2016). The petitioners claimed that the defendant wrongly fame her club for the activities for antisocial people. The honourable court identifies that the article caused damage to the reputation of the organisation and acquire loss to the petitioners. Therefore, the petitioner should be provided awards of $150,000 in public recognition place such as radio broadcasting. As the defendant organisation is related with public body which can influence public and customers, therefore, defamation suit can charged against them according to the provisions of the law of torts.

One of the famous cases for defamation is Duffy v Google Inc [2015] SASC 170; the petitioner possesses a series of online psychics through a website named Kasamba (Inforrm.org, 2015). However, later she complained that some of them includes by the posting report and comments website named Ripoff Report. Ripoff Report procures allegation against her regarding reposting their materials. Later on, the petitioner searches her name in the Google which resulted in defamatory materials against her name. She requested to Google to remove the content from the website. On the other hand, Google does not paid attention to the request. The honourable court provides liability on Google in the initial stage and procures damages for the petitioner. Later Google has provided defence that web content containing any defamatory statements against the petitioner is not published by them. Therefore, they cannot liable for the defamation suit and was not liable to pay AUD 100,000 to the petitioners under the legal statute of the Torts Law.

Similarly, any organisations cannot be charged with defamation, if the following action has not been acquired by them. Defamation suit can acquire if the organisations or individuals is related to cause of defamation of the victims. Therefore law of torts plays an important role over the business organisations operation and gaining competitive advantage in the market.

From the above analysis, it can be concluded that the provision of law of torts is important for the business operation. The Civil Law (Wrongs) Act 2002 defines different types of wrong action precisely performed by the companies which acquires financial loss in the business organisation. It provides breach of duty of care and factors which amounted as negligence in the business operation. The Law of torts reflects different types of civil wrongs which can creates harms to the other or any corporate body. Torts procure that any fraudulency or misrepresentation of the agreements can create negative impacts on the business organizations regarding its growth.

Australian law provides effective statutory for civil wrongdoings and also provides legal remedies for the victims of the civil wrong. It is analysed the customers loyalty can be acquired through the ethical practical and maintenance of the regulation provided by the law of torts. However, the study also provides that the trader is responsible to protect the things of the consumers unless it has not been disbursed. Therefore, any damages caused by the external force after disbursed of the material to the consumers, does not procures any liability on the trader. The present study also reflects the rules and regulation regarding defamation in the course business. It is evaluated that any defamation caused in the course of business can be penalized or the defamed party can ask for compensation under the law of torts. Moreover, the business organisation can be alleged with defamation if the corporation is related to public bodies. It is significantly related to the cause of defamation. Therefore, it can be finally argued from the above analysis that Law of Torts plays an important for the business operation.