Answer to question A

In the case study of ‘Is the Australian dollar overvalued?’ it has been discussed about the strength of Australian dollar on the basis of exchange rate. This article consists of several issues which has an impact upon the strength of Australian dollar with the effect of exchange rate.
a) In this article, one issue is that exchange rate fundamentally remains high all the time. However, it can decrease or increase with theshift of interest rate (Arvis et al. 2014). This affects the country’s growth rate and also the growth outcomes affecting both national income and GDP.
b) Second issue found in this article is that Australian dollar has been higher of amount third of a cent when traded according the governor of RBA (Bacchetta & Van Wincoop, 2013). However, it has got decreased due to increase in the interest rate by US 76.3c.
c) Thirdly, it has been seen that use of fair value instead of trade weighted index has left Australian dollar to be undervalued slightly
d) Fourthly, as bank uses the index measure of trade-weighted for Australian currency to gauge the appropriate level, rise in trade weighted index has become larger than it was expected for terms of trade.
e) Fifthly, it has been identified that if US Federal Reserve raises that rate of interest in the year 2017 and if RBA does not do so then it could lead to recalibration of Australian dollar (Bodenstein, Erceg & Guerrieri, 2017). This might create problem of under pricing in  the economy of Australian.
Lastly, another issue has been found in the article that for AUD the concept of tariff and trade conflict is not suitable. This can create problem for the growth of economy of Australia, its national income as well as GDP per capita.
Answer to question B
In order to determine the next economical period’s exchange rate, use of demand and supply framework is an effective one. Change in exchange rate is being analyzed by the help of demand and supply framework. According to Cashin et al. (2014), exchange rates are considered to be such rates that implies currency’s relative price. The demand-supply model of exchange rate determination implicates that exchange rate that is in the equilibrium position, changes due to change in factors that usually affect the change in the condition of demand and supply. For determining AUD in terms of forex market, application of this demand-supply model of exchange rate determination is effective. This model is perfect to analyze the exchange rate that takes place in the dollar market (Engel, 2013). 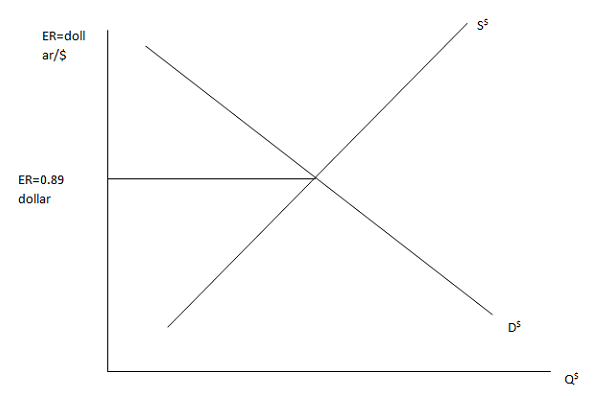 Figure 1: Demand and supply of exchange rate determination
In the above figure, the dollar market of Australia has been identified. The quantity on the x-axis should be the quantity of dollar that is present in the market. In the y-axis, it should remain price of dollar in another currency which in this article is USD. Therefore, in this article the exchange rate is being calculated in terms of exchange rate presented in euro-dollar (Engel, Mark & West 2015). In the above figure, both the demand as well as the supply curves indicates the dollar’s demand and supply. The figure shows an initial equilibrium point of exchange rate as 0.89 per dollar.
There are many factors that influence the fluctuation of demand and supply of dollars. Ceteris Paribus conditions are the one, which are associated with dollar’s demand and supply. In analyzing the effectiveness of AUD in forex market, these conditions or factors represent the exchange rate that exists between two countries by means of trade. The factors are:
Inflation rate
Interest rate
Growth rate
Government restrictions
Both inflation rate and growth rate are usually considered to be effective for trade related factors. Implication of these rates helps both countries to determine and follow a good exchange rate. Change in the interest rate affects the exchange rate too (Gabaix & Maggiori, 2015). Both the currency rate changes which further lead to either positively or negatively change in exchange rate.  Implication of government restriction tackles all the three rates, inflation, interest as well as growth, thereby tackling the exchange rate in terms of AUD to determine it in forex market.
Answer to question C 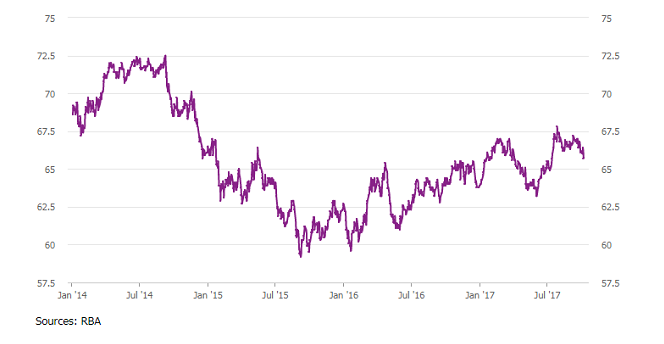 (Figure 3: Trade weighted index)
In trade-weighted index graph, it can be analysed that in 2014, the index amount was 69.4. Soon after that, in that year only it has decreased to 67.4 which was not an effective one for Australian economy. Throughout the year 2015 and 2016, the trade weighted index remained fluctuating. However, in the graph it can be seen that after January, 2017 it has started increasing that to with several ups and downs. After July 2017, it has increased to the level of 67.8 and again started decreasing.
Answer to question D
In the process of exporting alcoholic beverages in United States, the exporter might get impacted because of overvalued AUD on the income. There are several positive as well as negative impact caused by the value of Australian dollar. At the time of overvalued of AUD, exports will be benefitted. This will help the exporters to invest more in the foreign market putting much emphasis over diversification of the Australian economy in terms of trade (Gyntelberg et al. 2014). It has been identified that in the situation of overvalued; the exporters will be benefitted in two ways. The first one is with a higher currency. This implies that every export has had a pay rise. If the exporter who is exporting alcoholic beverages in United States from Australia wants to earn a stronger dollar, the exporter has to buy more imports from the foreign country where the exporter is performing the export facilities. Application of this higher currency will benefit the exporter in its booming phase (Manalo, Perera & Rees, 2015). The second benefit is rise in currency depreciate the pressure over inflation. This happens as import prices gets decline in terms of Australian dollars. Due to this, decreased level of inflationary pressure allows RBA in setting the rate of interest at very low level. Application of lower interest level in Australian dollar makes the exporter who is exporting alcoholic beverages in United States to earn some foreign direct investment that increases the income level of the exporter Cashin et al. (2014). Increase in income of the exporter leads to contribution towards the growth of Australian economy.
Answer to question E
If the market rate is US 76C, RBA decides to cut this market rate and decrease it to US 72C. In order to do so, RBA needs some actions or ways through which it can maintain the exchange rate that it has deemed to do. These actions or ways to maintain the exchange rate are:
Use of official reserves:
RBA can buy currency’s excess supply by selling out its reserve of foreign currency. This will help to shift the demand upwards by pulling it upright which further helps to maintain the exchange rate that it has deemed for, US 72C (Beckmann & Czudaj, 2013). If RBA analyse that existence of excess demand is there, it will sell some of its currency in order to buy another country's currency.
Side effect of this action:
The problem with this action to Australian economy is that if RBA runs out all its foreign currency reserves to buy excess supply of currency, then it will not be able to manage future exchange rate.
Increasing the interest rate: RBA can attract some financial investments from some other countries irrespective of the country with which Australia is having trade relation. This will lead to increase in demand of domestic currency at a higher rate (Arvis et al. 2014).
Side effect of this action:
This might lead to occurrence of recession in Australian economy which might lead to contractionary monetary policy.
Imposing exchange control:
Exchange controls are restriction on the number of foreign exchange that can be bought by domestic residents of a country. This puts restriction on the flow of money from the country.
Side Effect of this action:
Occurrence of misallocation of resources in the country. It affects the national income of the country. Therefore, decrease in the total GDP per capita occurs.
economics assignment, economics homework help, microeconomics assignment help, microeconomics assignment help, managerial economics assignment help, microeconomics homework help, economics homework, online economics assignment help, business economics assignment, economics assignment help online, microeconomics homework help, do my economics assignment, business economics assignment help, do my economics homework, international economics assignment help, economics assignment writing service
DOWNLOAD FULL SAMPLE
ozpaperhelp.com provides guaranteed satisfaction with a commitment to complete the work within time. Combined with our meticulous work ethics and extensive domain experience, ozpaperhelp.com is the ideal partner for all your homework/assignment needs. We pledge to provide 24*7 support to dissolve all your academic doubts. We are composed of 3000+ esteemed experts who have been empanelled after extensive research and quality check. ozpaperhelp.com provides undivided attention to each assignment order with a methodical approach to solution. Our network span is not restricted to US, UK and Australia rather extends to countries like Singapore, Canada and UAE. Our assignment help services include thesis help, case study help, homework help, coursework help, MBA help and Programming help. Get your work done at the best price in industry.