The modern day automobile industry is a very competitive landscape. The level and intensity of competition in the industry is at an all-time high (Mooij, 2013). This report focuses on evaluating marketing strategies adopted by Audi – one of the leading companies in the automobile industry. It is a German company that designs and manufactures some of the best cars in the world. The main purpose for conducting this report is to evaluate its current global marketing strategies and recommend various other tools through which performance of the marketing functioncan be enhanced and the company can achieve its goals and objectives in a lot better, efficient and effective manner.

The automobile industry is one of the most competitive landscapes in the world. It has evolved significantly over the years. Its importance can be understood through fact that they make major contributions towards growth and development of economies. One of the leading companies in this sector is Audi. It has been in existence since more than a century. Audi was established in 1910 and since then the company has grown at an exponential pace and has become leading name in the automobile industry. Due to the intense level of competition prevalent in the industry, Audi’s management gives a lot of importance on functions such as marketing. It is one of the most important parts of business operations for the company (Choi and Schellhase, 2014). It has significant impact on company’s functions, sustainability, etc. Thus it may not be wrong to say that success as well as sustainability of the firm is dependent on the marketing function. Audi is now looking to expand its car manufacturing operations in Spain and Nigeria.

Although the role of technology in modern day marketing functions is prominent, the company still shows great amount of interest in using the traditional mediums as well. The main reason behind this can be accorded to the fact that it is still a very effective way through which a firm can reach out to its customers, build relations with them and attract them (Leonidou, Katsikeas and Morgan, 2013).But majority of firms’ marketing strategy is largely based on digital and other such modern platforms. The current marketing strategy of Audi is three fold – vision, mission and goals. Vision of Volkswagen owned company Audi is to be The Number One Premium Brand in the automobile industry. In this regard the firm pays attention to various aspects such as sustainability, corporate social responsibility, etc. Current marketing strategy gives emphasis on innovation and improvement in products, processes and functions so as to provide the best and satisfactory services to the customers, to fulfill their needs and demands in the most efficient and effective manner. Similarly mission of the company is To Delight the Customers Worldwide. To achieve this mission, management has developed a four point objective. It is shown in the following image: 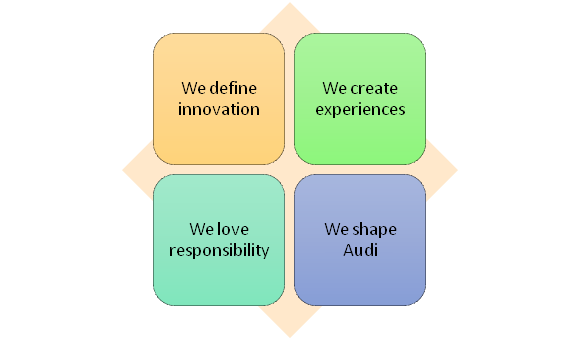 In order to get a better and thorough understanding about firm’s marketing strategy, marketing mix can be evaluated. It can provide much detailed information about its marketing plan and enable the management to use it to a great effect, so that corporate goals can be achieved in the end (Helm and Gritsch, 2014).In the following paragraphs 7P’s of Audi’s marketing strategy have been discussed.

Product: Audi is one of the three leading companies in the automobile industry. Since its establishment, more than a century ago, cars manufactured by the company have evolved significantly. By comparing earlier models of Audi’s car with the contemporary ones, stark differences can be observed. Therefore it can be said that the firm has tried to adjust its operations, design and features of cars according to latest trends prevalent in the market (Sinapuelas, Wang and Bohlmann, 2015). The management gives a lot of emphasis on market research to gather information about latest trends, customer demands, etc. It helps them in taking effective decisions.

Place: Although Audi is a German brand, the company has operations all around the world. It has showrooms and distribution centers in almost every country. Due to this reason, it is very easy for the company to sell and distribute its cars to customers, regardless of the place, region or country they might be living in (Tapp and Spotswood, 2013).

Price: A very important part of Audi’s marketing strategy is the pricing policy. The firm uses price skimming approach by positioning the brand to provide unique value to customers. It offers a wide range of car models in different categories. Additionally, the company offers to range of cars in each body styles and follows the tiered pricing strategy (Pourfarzi and et. al, 2016). This way the firm tries to attract customers from every price range and budget categories.

Promotion: One of the most effective approach through which the management tries to promote the brand is by involving it in various sports and sponsorship ventures. It can be supported through fact that the company has sponsored some Italian football teams and also is a permanent feature in Sony’s PlayStation series (Akgün, Keskin and Ayar, 2014). Apart from this the company also relies on more traditional mediums like advertisements on billboards and in magazines, TV commercials, etc.

Process: Another very important function of the marketing strategy is the process used by the firm to create as well as to deliver product to the customers. In this regard, Audi uses the latest tools, machineries and equipment to manufacture the cars. Similarly the management focuses a lot on providing efficient and effective services such as ability to customize the vehicles according to customer’s needs to satisfy them (Öztamur and Karakadılar, 2014).

People: Human resources are the most important part of Audi’s marketing strategy. The company gives precedence to training the man power in such a manner that they can make significant contribution towards attainment of organizational goals and objectives. Apart from this the company also gives importance to development and maintenance of a effective working environment, so that the employees feel comfortable and happy. This way they can perform to the best of their skills and abilities (Dadzie, Amponsah and Winston, 2017).

Marketing is one of the key functions for an organization, regardless of the industry that it might be a part of (Kolk, 2014). Considering the fact that the automobile industry is one of the most competitive markets in the world, the marketing function is even more important for an organization such as Audi. Currently the company is looking to expand in two countries – Spain and Nigeria. In the following paragraphs, a thorough analysis of these nations has been carried out by using PESTLE (political, economic, social, technological, legal and environmental) analysis.

Spain, also known as the Kingdom of Spain is one of emerging markets in the world. It is a sovereign state and a part of the European Union. Spain can be considered as a very good example of effective political transformations in the history. It transitioned from a monarchy to dictatorship and then finally to a democratic environment (Cannon and Yaprak, 2014). The People Party, when in power initiated a number of policies to improve economic reforms and for the process of fiscal discipline. One of the biggest strengths of Spain in terms of political environment is that despite major changes in power and such massive transitions, all governments have given special attention towards continuity of economic policies. This is one of the main reasons that the country has enjoyed such profound economic success over the years. It can be supported through fact that the targets set under the Maastricht Treaty do not give too much freedom to the government to stray away from EU practices. In addition to this, currently Spain has very good relations with other countries in the European Union. According to various experts, one of the main reasons behind country’s exponential success and stability in terms of its economic environment is its close relations with EU nations, which has resulted in large inflow of economic aid from rest of the EU (Markkanen, 2015). Since now Spain is a democratic country, it will be a lot easier for Audi to expand its operations and further solidify its position and image in the nation. It will be very useful in enhancing its sustainability not only in the country but in the world as well.

Since 2007, the country has been facing major economic issues. But before that Spain experienced growth period that lasted for nearly 13 years and helped it to become one of the fastest growing economies in the world. It became a part of the European Union in 1986 and since then it has grown at an exponential pace. This membership with the EU is its biggest in terms of economic performance. Due to this reason, the government is committed to maintaining certain levels of fiscal and monetary stability, required as per the Maastricht Treaty. Recently it has been observed that the government has imposed a limitation in terms of competition in the energy, electricity and telecommunications industry (Griffith and Hoppner, 2013). This means that there are very few regulations on the automobile industry, indicating that government interference in this sector is less. Spain also boasts of having a very strong foreign direct investments (FDIs). On the other hand, it is expected that the country will continue to grow at a healthy pace even though it is suffering from a major recession. In addition to this, Audi’s management will have to keep in mind that the rate of unemployment in Spain is very high (Mooij, 2013). This can be a major problem for the company in developing an effective marketing strategy for the country.

The economic development that the country has obtained over the last some years has had a major impact on its social and cultural environment as well. Primarily social environment of Spain is similar to other European nations. One of the biggest challenges for the company in this environment will be the fact that Spain has aging population. In addition to this the nation is also facing issue of rising unemployment levels and unequal income distribution. Experts have cited that this could adversely affect its economic growth in the future (Choi and Schellhase, 2014). But the country has one of the best education systems in the world, due to which it is expected that in the coming years the residents will have a better lifestyle and the per capita income will rise.

DOWNLOAD FULL SAMPLE
ozpaperhelp.com provides guaranteed satisfaction with a commitment to complete the work within time. Combined with our meticulous work ethics and extensive domain experience, ozpaperhelp.com is the ideal partner for all your homework/assignment needs. We pledge to provide 24*7 support to dissolve all your academic doubts. We are composed of 3000+ esteemed experts who have been empanelled after extensive research and quality check. ozpaperhelp.com provides undivided attention to each assignment order with a methodical approach to solution. Our network span is not restricted to US, UK and Australia rather extends to countries like Singapore, Canada and UAE. Our assignment help services include thesis help, case study help, homework help, coursework help, MBA help and Programming help. Get your work done at the best price in industry.