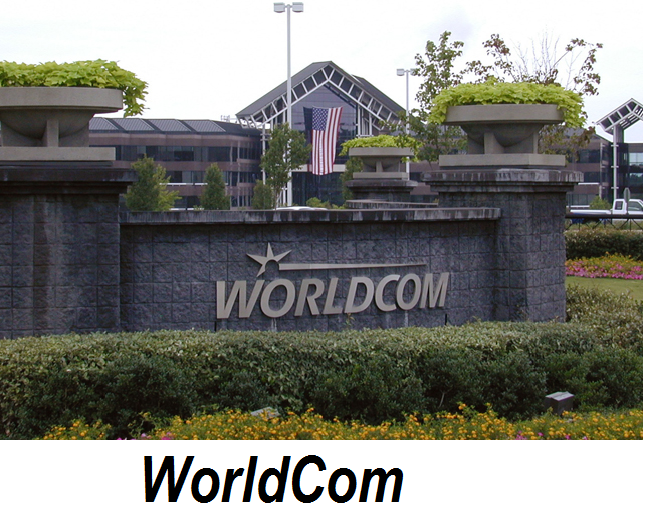 Consider the following scenario, based on Cynthia Cooper's recollections of the events that brought down the telecommunications giant WorldCom. Cooper was an internal auditor at WorldCom and eventually uncovered the fraud that would shut the company down. As she explained, it started with the Financial Controller's alarm at unexpectedly high line rental costs that would significantly decrease expected earnings. "Line rental costs" represent the money that WorldCom pays to use the telephony infrastructure (poles, wires, maintenance etc.) that are owned by other companies. The stakes appear high: unexpectedly high costs would mean that earnings are lower than expected. This would damage WorldCom's share price and increase the cost of future capital raising.

In the following passage, WorldCom's Chief Financial Officer (CFO) Scott Sullivan discusses the problem with the Financial Controller David Myers before enlisting vulnerable accountants into a fraudulent scheme that would eventually bankrupt the company:

The pressure is intense and building every hour. What are we going to do, David asks Scott. Scott is at a dangerous crossroads. He rationalizes that the cost of telling the truth is too high. In any case, there must be an error, he thinks, and it'll surely correct itself the following quarter. Change the numbers, he instructs David. Reduce line-cost expense so that the company can meet earnings guidance. "While [Scott] didn't believe that this was the right and appropriate thing to do," David later recalled, he said "this is what we needed to do at the time." Scott's instructions are stressful for David. But David has always felt loyal to his boss, so he, too, rationalizes. This will be temporary. There must be an error. Scott is sure of it. Either way, WorldCom is just going through a tough time. The industry will soon turn around. To change the financial statements, David will have to pull several of his mid-level accountants into the plan. David and Scott are at high enough levels in the company that they don't actually make accounting entries in the system. The trusted inner circle will have to grow.

David decides to relay Scott's message to his right-hand lieutenant, an accounting director named Buford (Buddy) Yates. David trusts Buddy. They've been friends for many years, having worked together at Lamar Life. Buddy joined WorldCom in 1997. With a stocky build and grey hair, some say he can be like a bulldog-he isn't afraid to speak his mind and doesn't mince words, turning gruff at times. This time is no exception. Buddy can't believe what he's hearing. Is Scott really serious? Very much so, David tells him. David then turns to Betty Vinson and Troy Normand, two mid-level accountants who report to Buddy and play a key role in compiling the financial results. They'll be able to analyze the details, help decide which specific accounts to adjust, and physically make changes in WorldCom's accounting system.

Like Buddy, Troy and Betty are extremely uncomfortable with Scott's request. This is beyond tweaking—to meet earnings expectations, they'd have to make adjustments in the hundreds of millions of dollars with no support and only the hope that the problem would correct itself. They're feeling upset and pressured, but there's little time to think things through—the company has to release its earnings to the public. All three are their families' primary breadwinners. Not following orders could mean losing jobs that aren't easily replaceable in Jackson, Mississippi. Begrudgingly, they decide to go along with the plan—this once (Cooper 2010, pp. 5–6).

We are left to surmise how differently the future might have been for WorldCom and those mentioned in this brief passage (all of the people mentioned served jail time) if only a more rigorous ethical environment had existed. At a time when professional people needed guidance, either none was at hand, or (perhaps the most surprising) they didn't know where to look. We now know that at that time, WorldCom had no formal ethics program—in fact one such program was dismissed as a waste of time (Schwartz 2004). When it mattered, the absence of such a program seriously limited the options available to those professionals.

We can only speculate how differently things might have been for these actors in the WorldCom tragedy, and for WorldCom itself, if its culture supported ethical thinking and ethical decision-making. In a more supported ethical culture, those accountants, at the very least, would never have allowed themselves to be pressured into actions they suspected were unethical and illegal.

You are to submit an individual report containing three parts, but with a common title page, executive summary, introduction, conclusion and reference list.

This is not really an assignment about WorldCom: it is about where guidance can be found when confronted with a potential unethical (even illegal) outcome. In this assignment you will be evaluating philosophies/theories, the AAA model and APES 110 to determine how they can guide or inform an ethical outcome.

Assume the role of Buddy. Before you agree to do what David wants, you reach into your top drawer and pull out the seven step AAA Ethical Decision-making Model. Use the model to decide what your decision should be.

To answer this part, use the seven steps as sub-headings and set out your response to each step. Some steps will require more research than others.

At the end, clearly state what your decision is, and make sure it is a logical conclusion from your seven steps.

Assume that David is a member of CPA Australia and that he has asked you to advise him on the application of APES 110 to this situation. As a senior professional accountant, David has a responsibility to ensure that he and the accountants that work for him provide ethical advice and services.

As an expert on APES 110, advise David on the requirements of APES 110. Given the scenario that has been described above, assume that David has not yet pressured Buddy to act unethically. What are the fundamental principles that David and his staff must uphold? What threats does David face and what safeguards could he put in place to mitigate threats to the fundamental principles?