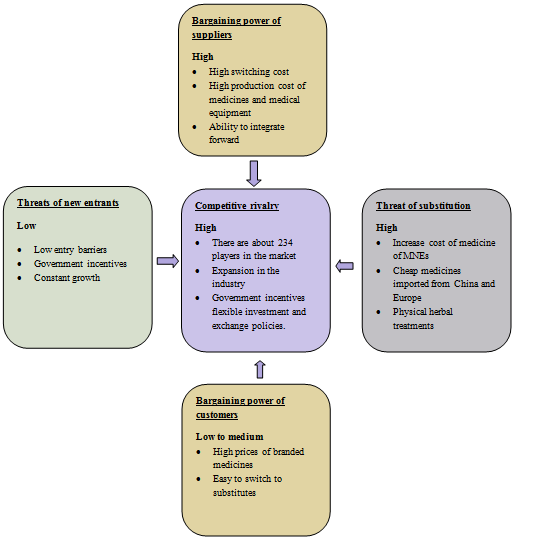 Modern Pharmaceutical industry is known as one of the big revenue generation and profitable  businesses in the world with an expected  annual growth of 7.5% between 2014 to 2019.In 2014 pharmaceutical income of the world has reached up to one trillion U.S dollars for the first time of the history. Majority of this income has mainly generated from ten  leading pharmaceutical companies located in North America, South America and Europe. (Global Pharmaceutical Industry - Statistics & Facts).They represent about 85% of the market share while United States remains as the leading market over 45% of the market share and GDP of 3%.(WHO 2015)
Asia Pacific region is becoming a major player in the market having China as largest GDP contributor. While Japan and Australia competing with China as second and third largest, Malaysia is struggling to increase the market share because of large young population of about 32.2% out of 63.4% of age group between 15 and 64.Accordinly there is less need for medication compared to countries with large aged population such as Australia and Japan.

There are four different pharmaceuticals product lines in Malaysia: prescription medicines, over the counter products(OTC), traditional medicines and food/health supplements .Home Pharmaceutical (HP) is concentrate about three strategic business units (SBUs) namely over the counter products, hearing devices and health food supplements unit.OTC products line continue to grow because it generates a lot of savings for the health care systems in many countries specially in developing countries. Research has found out that in 2015,OTC line of  business has generated about US$ seventy billion worldwide .(PharmExec.com)

There are some opportunities available in the Malaysian market with an expected growth of 13% p.a. Accordingly  HP should be able to take advantages of the situation being 6 major local companies in the industry. However it will not be easy for HP to stay competitive and enter in to export markets  because of the establishment of multinational pharmaceutical firms in the country. This has become one of the main reasons for capitalization need of US$70 million in 2016 alone in order to remain competitive.

PESTEL analysis helps to understand market growth or decline, and as such the position, potential and direction for a business (Miller; Vendome;McBrewster,2011) application of this analysis is as follows,

Political environment of Malaysia likely to have favorable situation for the foreign investments by encouraging  the access of foreign product in local market. Malaysian Ministry of Health  has introduced  entry point projects, and international harmonization of the regulation under Drug Control Authority to promote multinational pharmaceutical companies by setting up licensing arrangements with local incorporated companies. Also government have recently introduced a procedure to inspect foreign manufacturing facilities compared with  regular inspection of local firms. Local doctors chemist chains and hospitals are starting to favor medicines coming from global multinational international firms. Accordingly it doesn't seems that government is taking initiatives to impose barriers for the entry of imported generic drugs to local market. These factors will  certainly bring competition to HP.

On the other hand government does not  budget same level of expenditure on public health compared to developed countries in the Asia Pacific region such as Australia. In Malaysia 55% of health care facilities is funded by government and 45% have fund by the patient.60% to 70% of patients go to public hospitals. If the drug is not listed in the hospital patient does not get access the innovative drugs. (PharmExec.com)

Malaysian government has entered in to  several agreements with other countries in order to support and enhance trading activities of the country. Introduction of Off-Take agreement scheme under EPP 3 has created a lot opportunities to local pharmaceutical companies to export their products. (PharmExec.com)

Also amendments to the  ASEAN China frame work agreement has enhanced economic corporation and  free trade activities between Malaysia and China .This facilitates exports and imports of pharmaceutical products from and  in to China without any duty. Similarly new European Free Trade agreement should reduce or remove the barriers of exports and imports of pharmaceutical products between countries. Accordingly this will lead HP to look at exporting opportunities seriously.

Malaysia healthcare market  has a huge potential for growth because of increasing elderly population in the country. Country is aiming an increase of aged population 65 and above at a rate of 7% in 2020.(Department of Statics 2013).Also according to world bank ranking country has ranked as 23th best country in the world to do business. Also Malaysia has ranked third largest recipient of foreign direct investment in the ASEAN nations. Malaysia government is considering an Entry Point Project (EPP 2) to support eco system by introducing 1000 clinical trials per year .

Growing environment agenda in Malaysian business has become a key factor. There is also requirement for companies to comply with corporate social responsibility. Accordingly Pharmaceutical companies should work together with professional bodies and regulatory authorities to comply with those procedures in developing and marketing a new product  to the market. Also people in Malaysia have started to become health conscious and this has contributed to increase the demand for  OTC and food/health supplements which is a good sign of growth in HP's business in future.

Online opportunities are available for people in Malaysia for channeling doctors, ordering OTC and food supplements ,healthcare programmers to name a few. Also government is encouraging companies for bio technology, technology acquisition and new drug discoveries by introducing investment tax allowance incentives which HP can work with government to get benefit out of it easily because of their established name for research and  new product development .

According to Michael E Porter ,five forces analysis is a framework for analysis of industry structure and competitiveness of the companies. He identifies four other competitive forces apart from industry rival to analyse the competiveness which will support to achieve medium and long run profitability of a company .Accordingly five forces are; rivalry among existing competitors, bargaining power of  customers, bargaining power of  suppliers ,the treat of substitute, threat of new entrants.

The pharmaceutical industry in Malaysia is highly competitive because of  existence of many local and overseas pharmaceutical companies .There about 234 companies registered under Drug Control Authority in Malaysia as traditional and modern medicine firms. The lack of entry barriers  such as government incentives and tax savings ,liberal investment and exchange control policies quality of life, developed infrastructure, exemption from duty on raw materials, skilled workforce, vibrant business environment are inviting factors of foreign investors and low entry barriers in the industry (MIDA 2013)

This has caused  to import or manufacture cheap medicine in the country and increase in  the rivalry between companies. Further pharmaceutical industry has recorded a constant growth over the years and there is a high potential for industry expansion.