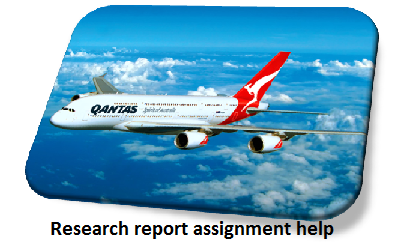 The industry, which will be the focus during this research report, will be Australian airline industry, and the company selected from the industry is Qantas Group. Australian airlines have faced both good and bad times over the period of time. It faced a market decline in global tourism in the outcome of terrorist attacks in the US that took place in 2001 and in recent times, due to Iraq war that cause traffic loss. However, apart from these disorders, the airline industry of Australia has also experiences significant structural change after the late 90s. The 'domestic trunk routes' in Australia are now dominated by two major airlines Qantas Airways and Virgin Blue, which is still struggling for high market share. Qantas Airways is the largest airline in Australia in terms of fleet volume, international destinations and flights (Parliament of Australia, 2016).

Qantas was founded in the year 1920 in Queensland and since then the company has grown to be largest domestic and international airline in Australia. It has also now become one of the profound brands based on Australia and is also considered as the foremost long distance airline in the world. The company has gained a status for brilliance in safety, customer service, operations and reliability. The two corresponding airline brands of the Qantas group are; Qantas and Jetstar and it also has business in expert markets, like Q Catering. The company employs more than 30,000 employees and about 93% of them are of Australian nationality. The company functions with the vision to the biggest premium airline in the world (The Qantas Story, 2013).

2. The Micro and Macro Environment:-

The macro environment analysis of the company has been performed using the PESTEL analysis model that will help in identifying the key macro factors that affect the company:

The key political decision that affects the operations of Qantas airline is that the Australian government has deregulated the domestic airline industry; due to this new airline companies can perform their business operations in Australia. Also, there are no boundaries on freedom of entry by domestic airlines, to domestic trunk ways. Nonetheless, limitations by federal are still in force, which makes sure that Australian airlines can take domestic passengers and freight, but foreign airlines cannot carry local passengers on local sectors of their global amenities (Parliament of Australia, 2016).  As a result, Qantas has got an opportunity to distinguish itself from the rest of the airlines, but it is also threatening for the company as it has to face competition from new players(Australian Government, 2016).

The prominent economic factor that has affected Australian airlines fundamentally is the Global Financial Crisis as the tourism sector in Australia has hard hit by this compared to the rest of the economy. This determined the personal income of people and their expenses. However, the pertinent rise in the real average earnings of people in Australian in the past decade together with the decrease in air fares implies that affordability of air fare has enhanced noticeably in Australia (Vu, 2015). Now, more of the Australian people can manage to take flights. On the other hand, this does not essentially imply that competitiveness of air travelling has enhanced in comparison to other modes of transport mode. This is because constant growth of inter-regional road connection and regional rail facilities has made the competition more rigorous. Moreover, decrease of the Australian dollar in last two-three years has enhanced expenses of the aviation industry because it is highly dependent on imports for aircraft, fuel, and spare parts (Freed, 2016).

Social factors are considerable for Qantas Airways considering that air travel has now become synonymous to reputation and high status. Also, people have now become more aware of different airlines and can make easy comparison between their services due to the presence of social media and internet (Freed, 2016). Notable, consumers are also preferring low cost airlines as compared to premium airlines as it has now become reasonable than ever to fly out from Australia to distant South Pacific areas. Moreover, demographic factors, like age and income prominently affect the desire to travel by airlines (Attitude Travel, 2013).

Airline industry is facing high concern related to environmental pollution and emission of carbon in environment. In Australia, a carbon pricing system, commonly known as the "carbon tax", was commenced in 2011 and came into action 2012, but it cancelled on July 2014. However, the government is constantly working to control the carbon emissions and making airline industry an environmentally responsible one. Qantas is indeed constantly working to reduce its environmental impact by controlling emission of polluting gases (Australian Government, 2016).

In order to assess the micro environment of the company, the Five Forces Model provided by Porter will be used. This will help in assessing how micro factors affect the airline industry as well as in analysing the attractiveness of the Australian airline industry.

It is notable that buyer’s power relies on the number of players in the industry and the services they provide. Buyers in Australian have the option to choose from Virgin Blue or from Qantas. Also they can opt for international airlines for travelling purposes. Thus, availability of different service providers and variety of service has increased the buying power of buyers (Thomas, 2013).

Threat of new entrants for Qantas Airways is low because of the vastness of the company as well as its services. Qantas has already leaded to the exclusion of few airline companies from the Australian airline industry due to its amalgamation with different airline companies. Also, entrance in the airline industry requires huge capital investment and brand power that makes the threat low (Vu, 2015).

The current scenario of airline industry of Australia states that Qantas airways have been competing majorly with Virgin Blue in Australia in the domestic market. However, this rivalry is extremely intense as both the company wants maximum market share. Further, competitive rivalry is also strong because Qantas has to compete with international players also who have high brand power and customer base (Gans, 2011).

Apart from other factors that provide competitive advantage to Qantas airways are:

· The company has emerged as a huge brand in the domestic market by doing partnership with tourism Australia, as tourism is one of the best ways to enhance the market share of airlines. Qantas airways is the leading airlines in the airline industry of Australia

·    It has achieved competitive advantage with the help of its widespread operating network, which has helped it to enhance its revenues and sustain cost advantages.

·   The strong partnerships and alliances of company with big giants such as Emirates, British Airways and many more have helped Qantas to ease it operations in the international market.

To conclude, it can be stated that the present report is focussed on the airline industry and the company Qantas Airways, which is the largest airline in Australia in regard to the size of fleet, destinations and number of flights. Also, Qantas Airways is the leading airlines in the 'domestic trunk routes' of Australia.

The changing macro and micro factors have affected the dominance of the company and now forcing it to adopt significant measures for maintaining its lead in the industry. The brand has competitive advantage on its rival, because of its customer service, brand power and differentiated offerings. The company should use this to implement the mentioned recommendations in the report and to maintain its dominance in the airline industry.