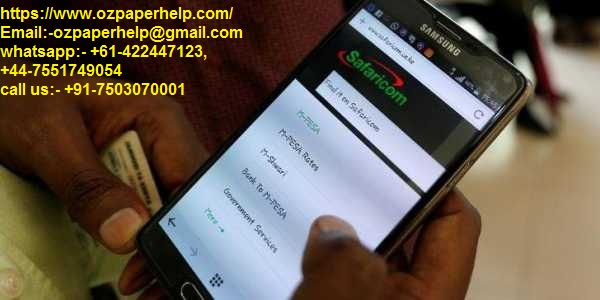 In 2007, Kenya woke up to a new money transfer system, The M-PESA. M-PESA is a mobile phone based money transfer system. M-PESA is operated by Safaricom which is one of Kenya’s leading cellular phone provider. It is currently the largest in the country. Subscribers of M-PESA exchange cash with floats. M-PESA allows users to send floats and to exchange the floats with cash during withdrawal. After eight months since its beginning in 2007 in March, approximately 1.1million Kenyans had registered to use M-PESA services. A total of US$87 million cash had been transacted over M-PESA in the same period according to Safaricom.

Approximately 8.6 million Kenyans had registered to the service by 2009 and a total of US$3.7billion had been transacted since 2007 according to Safaricom. This amount, US$3.7billion is equivalent to 10% of Kenya’s GDP. By April 2010, M-PESA agents had grown to 18000 locations from 450 in 2007. Kenya has around 491 bank branches, 500 post bank branches and 352 ATMs. The mobile phone service is growing at a high rate. M-PESA is continually growing responding to competitive pressure and customer needs. Although M-PESA has received more attention, there is little quantitative evidence on its economic and social impacts.

M-PESA has emerged out as one of the superior money transfer systems in Kenya. Even though it’s a money transfer system, it is expanding to become one of the platforms for saving money. M-PESA has seen people in rural areas being able to send and receive money. The e-float has increased the efficiency with which money can be transferred hence far much better than the cash-based system.

Having a significant impact on previous money transfer companies and a transmitter of 10% of the country’s GDP, it has economic impacts. Banks have partnered with M-PESA after their pleas to regulate M-PESA failed. M-PESA has forced money transfer companies to lower prices and also induced firms to improve their products and services. In some cases, firms have partnered with M-PESA to offer integrated services. Despite all the attention M-PESA has received, there is little quantitative evidence on its economic and social impacts. Therefore, M-PESA is still a topic of discussion to what it is going to be in future.

Given our research topic on the study of impacts of M-Pesa, the questions of the research are designed a follows;

The overall objective of this study is to establish the impact of M-PESA as a money transfer system in Kenya in the mobile banking sector. The study will also identify effects of M-PESA on money transferring companies. Our specific research objectives are;

-          To establish specifically the economic impacts of M-PESA.

-          To find out the reason behind the M-PESA system not used as a facility for storage of value.