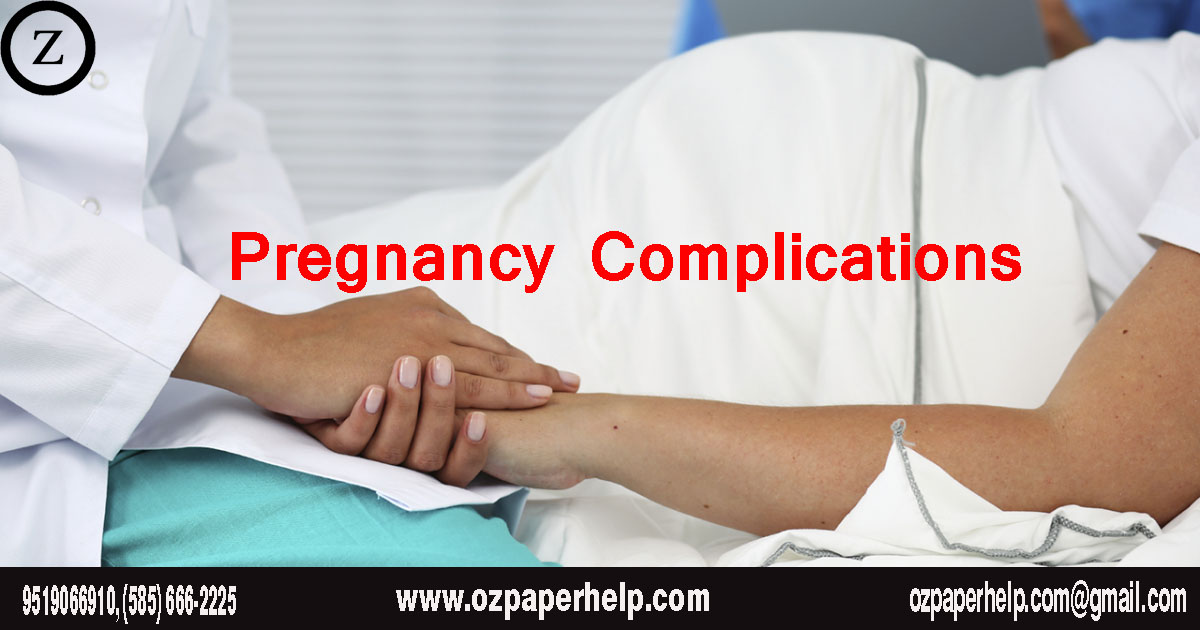 The herpes virus CMV is one of the leading causes of infectious congenital defects. It disrupts placentation by modulating signalling pathways whose downstream effects are necessary for the invasion, migration and proliferation of cytotrophoblasts and extravillous trophoblasts. The canonical and non-canonical WNT pathway and pathways activated by EGFR are targets of HCMV during pregnancy. The absence of extravillous trophoblast invasion disrupts uterine vascular remodelling, leading to impaired placental development. This results in congenital defects, pre-eclampsia, miscarriage and a myriad of other complications. Understanding how these pathways interact and how HCMV modulates them will provide targets for pharmacological intervention.

Cytomegalovirus is the leading cause of congenital defects in developed countries (Zuylen et al., 2016). The virus causes damage to both the foetus and mother by indirectly and directly affecting the process of placentation, leading to pre-term labour, pre-eclampsia and miscarriage (Han et al., 2010). Currently there is no effective treatment for the complications of vertical CMV transmission (Le Marca et al., 2006). Therefore, in order to find targets for pharmaceutical intervention, it is necessary that we understand the physiological mechanisms behind CMV associated congenital defects.

The process of placentation begins after implantation, when cells of the trophoectoderm give rise to the primitive syncytium (Knofler & Pollheimer 2013). Lacunae start to form in this space, while cytotrophoblasts undergo mass proliferation to break through the primitive-syncytium and form primary villi – either floating or anchoring (Knofler & Pollheimer 2013). At distal sites, cytotrophoblasts receive morphogenic signals to proliferate and form cell columns. These columns give rise to different invasive extravillous trophoblast subtypes, and form an attachment point for the anchoring villus and maternal decidua (La Marca et al., 2008). Extravillous trophoblast cells (EVT) invade the decidua, and migrate into the wall of uterine spiral arteries to begin the process of uterine vascular remodelling. (Angelova et al., 2012). This process is necessary for the developing foetus to receive adequate nourishment from the maternal side and is completely dependent on cytotrophoblast proliferation and EVT migration and invasion (Han et al., 2010).

EVT invasion is complex and relies on signalling pathways, such as WNT, PI3K, AKT and MAPK to cause epithelial to mesenchymal transition, secretion of MMP’s for the degradation of extracellular matrix, proliferation by upregulating proteins involved in cell cycle progression etc. (La Marca et al., 2008). This review will focus on 1. Normal signalling pathways during placentation, 2. how HCMV highjacks and modulates signalling pathways that are necessary for EVT invasion and cytotrophoblast proliferation and 3. possible pharmacological targets for HCMV infection during pregnancy.

Canonical WNT signalling stabilises and causes nuclear translocation of β-catenin. Normally cytosolic levels of β-catenin are low, since it is being degraded by a destruction complex consisting of Axin1, GSK3- β, APC and CK1α (Angelova et al., 2012). Stimulation of the WNT pathway disrupts the destruction complex by initiating a cascade of interactions that lead to the phosphorylation and activation of the scaffolding protein Disheveled (Dsh/Dv1). Following Dsh/Dv1 mediated disruption of the destruction complex, β-catenin is translocated to the nucleus. Once in the nucleus it binds to T cell specific factor (TCF) and lymphoid enhancer binding factor 1 (LEF-1) to activate the transcription of genes such as cyclin d, MMP-2, MMP-9 and c-myc (Knoffler & Pollheimer 2013). These genes and their downstream effects are necessary for placental development (Matsuura et al., 2011 as cited in Knoffler & Pollheimer 2013), cytotrophoblast proliferation and differentiation into extra-villous trophoblasts (EVTs) (Angelova et al., 2012) (see figure 1).

A study by Angelova et al., 2012 showed that when human foreskin fibroblasts (HHF) and SGHPL-4 cells (an extra villous trophoblast cell line derived from first trimester placenta) were transfected with HCMV and stimulated with Wnt-3A ligand, β-catenin was degraded. Rather than seeing the translocation of β-catenin to the nucleus (as shown in mock infected and PBS treated controls), HCMV infected cells induced a juxtonuclear accumulation of β-catenin.  This is confirmed in other literature, with studies such as Roy et al., 2015 attributing the degradation of β-catenin to HCMV increasing Axin-1 expression through the inhibition of Tankyrase PARsylation (see figure 2).

The above results indicate that HCMV infection disrupts the proliferation and differentiation of cytotrophoblasts by targeting the β-catenin/TCF/LEF-1 complex (Angelova et al., 2012). Without β-catenin activating cyclin d expression, EVTs are arrested in G1 phase and do not undergo the rapid and massive proliferation seen in normal placental development (Angelova et al., 2012). Without this proliferation column trophoblasts (CCT) do not form, and without these CCTs there is no attachment site connecting the anchoring villus to the maternal decidua (Knofler & Pollheimer 2013). The degradation of β-catenin and subsequent inhibition of MMP-2 and MMP-9 expression leads to the non-invasive phenotype of EVTs seen in HCMV infected SGHPL-4 cells. Without the invasion of EVTs in the decidua and uterine spinal arteries, placental development is impaired due to insufficient remodelling of the uterine vasculature (Han et al., 2010).

WNT signalling can also occur independently of β-catenin and this is achieved through the Wnt5a ligand. When this ligand binds to its receptor ROR2, the non-canonical WNT pathway is activated leading to the RhoA and Rac-dependant activation of the JNK pathway (Zuylen et al., 2016). The JNK pathway has been shown to mediate trophoblast migration by increasing epithelial to mesenchymal transition via the upregulation of MMP-9 and MMP-2 (Pollheimer and Knofler 2005).

A study by Zuylen et al., 2016 was the first to demonstrate that CMV also targets the non-canonical WNT pathway to reduce trophoblast migration. Transwell migration assays demonstrated that Wnt5a positive SGHPL-4 cells increased trophoblast migration, while infected SGHPL-4 cells dampened migration. It was thought that CMV increased expression of ROR2, which in turn modified Wnt5a signalling to antagonise the Wnt3a β-catenin dependant pathway at the level of the β-catenin/TCF/LEF-1 complex. Unlike the canonical pathway, CMV infection and subsequent increased ROR2 expression did not have an impact on proliferation, indicating that there is a fine balance between the activation of the canonical and non-canonical pathway during placentation.

Interestingly, the above study showed that ROR2 siRNA treatment did not completely recover CMV-reduced trophoblast migration. Therefore, it can be deduced that other pathways e.g. PI3 Kinase, AKT, Notch, Canonical WNT and MAPK are also responsible for EVT motility (see figure 2) (La Marca et al., 2008). These pathways may able to be used as pharmacological targets. In fact, studies have shown that when HCMV infected cells are treated with salinomycin -a WNT modulating agent often used in cancer therapy – there is a significant decrease in HCMV replication (Kapoor et al., 2013). It was also shown that salinomycin further decreased Wnt5a and axin 1 expression, indicating that there is a balance between infection and WNT signalling (Kapoor et al., 2013).

EGFR and the Rho A, PI3 Kinase, AKT and MAPK pathways

A number of studies have shown that EGFR is a cellular receptor and entry point for HCMV (Wang et al., 2003). ChIp assays performed by Jafferji et al., 2009 demonstrated that once HCMV was in the cell it downregulated EGFR expression by increasing the RNA and protein expression of Wilms Tumour Factor 1 (WTM 1), and increasing WT1 binding to its cognate binding site in the EGFR promoter (Jafferji et al., 2009). The dysregulation of EGFR caused decreased cytotrophoblast and EVT migration, proliferation and motility, leading to impaired uterine vasculature remodelling (Le Marca et al., 2006) (see figure 2). Interestingly, the virus selectively maintained the downstream pathway mTOR, which is necessary for replication (Buehler et al., 2016), indicating that HCMV not only modulates signalling pathways to evade the host response, but also highjacks them to ensure survival and persistence of the infection. 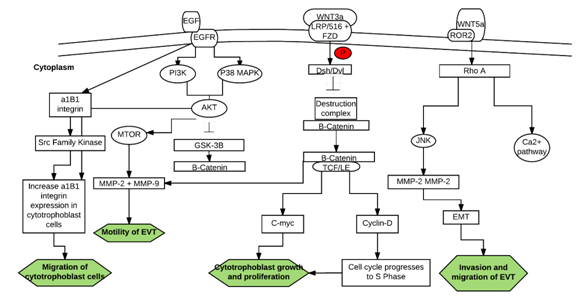 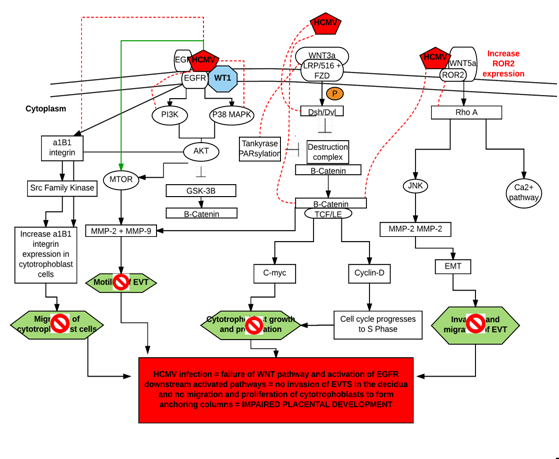 HCMV modulates a number of cell signalling pathways that are necessary for placentation. It is not yet known why the virus chooses these particular pathways. Perhaps, regulating these pathways allows for the persistence of the infection, for example HCMV maintains mTOR, a downstream target of EGFR-induced PI3K activation (Buehler et al., 2016). Nonetheless, HCMV modulates pathways whose downstream targets are necessary for invasion and migration of cytotrophoblasts and EVTs, causing pregnancy complications. Understanding the balance and cross-talk between these pathways and CMV will help find targets for pharmaceutical intervention that are not toxic to primary cells. Areas of future research should include:

·         the role of HCMV on EGFR mediated PI3K activation, currently there is no consensus in the literature, with studies such as Wang et al., 2003 concluding that HCMV activates PI3K to increase replication and Buehler et al., 2016 concluding that PI3K caused a reduction in virus titre of fibroblasts.