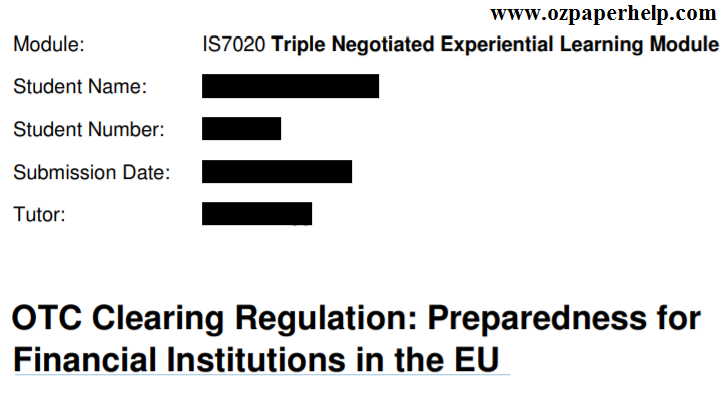 in the EU Introduction Taken at its total notional value, the OTC Derivatives1 market is roughly ten times the size of the exchange traded derivatives market, meaning that the number of bilateral transactions far exceeds those cleared through an exchange. Since the global financial crisis of 2008, governments – with the United States at the forefront – have introduced regulations targeting OTC derivative products in the hopes of reducing systemic risks to global financial stability.

This research project will delve into these regulations existing in the European Union, and will combine an evaluation of the policy goals, implementation challenges for financial institutions, and trends in the industry with expert analysis to arrive at a framework outlining the next steps that financial institutions must take in order to be compliant with the current EU regulation.

Post-2008 Regulatory Background The financial crisis of 2008 was triggered by a multitude of interrelated factors, including the rapid appreciation of asset prices, a credit boom (indicative of high leverage), financial deregulation and liberalization, dramatic increase in international financial integration, shadow banking, and explosive global growth in derivatives – particularly structured credit products – as well as their mounting complexity, which generated uncertainty in the value of their underlying assets and hence their risk. Its aftermath brought to light the need for adequate regulatory oversight and the development of agreed-upon standards, which has materialized in the form of increasingly stringent financial regulations in recent years. 2009 saw the emergence of the Financial Stability Board (FSB), which harmonizes the work of different national financial authorities, particularly from the G-20 countries. Key reforms that 1 OTC – or over the counter – derivatives are custom contracts privately concluded between counterparties that produce certain obligations and rights in relation to an underlying asset. They are often used for hedging and risk mitigation.

Page 10 of 56 the FSB has helped to finalize and that are currently under implementation are the adoption of capital requirements under Basel III2, the Liquidity Coverage Ratio (a liquidity standard), reforms of bail-in instruments, adoption of principles for sound compensation practices, improvements in the harmonization of collecting consolidated data on the bilateral counterparty and credit risks of major banks, as well as reporting and clearing requirements of certain OTC derivatives and clearing counterparty (CCP) standards. (Claessens & Kodres, 2014) However, the issue of maintaining global consistency of standards remains paramount in the observed disparity between the idealistic financial security goals at the G-20 level and the clashing regulatory regimes that were implemented in practice. In part, this has arisen due to the fragmentation and migration challenges present in the private sector, which exerts pressure on its local regulators to favour less stringent policies.

Consequently, this fuels an ideological conflict between encouraging market competition (particularly in maintaining market infrastructure like CCPs – which will be discussed shortly – to maintain this) and protecting the overarching financial system. At the same time, regulatory competition amongst countries typically moves in the direction of higher risks and lower standards, which leads regulators to seek the lowest common denominator (minimum standards) in order to avoid a complete race to the bottom that could culminate in the collapse of the global financial system. This struggle in turn raises the longstanding subject of when the importance of economic protectionism supersedes the benefits of an “open, global financial system with free movement of resources and ample risk diversification” (Claessens & Kodres, 2014, p. 14). As a result, progress in implementing regulatory commitments made at the G-20 level across these jurisdictions is uneven at best.

(Claessens & Kodres, 2014) OTC Derivatives and Central Clearing Over-the-counter, or OTC, derivatives are similar to exchange-traded derivatives (ETD) in that they are contracts between counterparties that produce certain obligations and rights in relation to an underlying asset, which can be anything from commodities like gold to interest rates and indices. All derivatives fall within four groups: futures, forwards, swaps, and options, or can be a combination of these in the form of exotic products. However, ETD products are standardized and cleared through the exchanges they are traded on, while OTC derivatives are concluded through private bilateral negotiations. This allows the users to tailor the contracts to their precise business needs (more efficiently than with ETD) and to maximize the benefit of the derivatives contract as a mechanism for risk management (i.e. hedging), which is one of the ultimate purposes of engaging in the derivatives market. 2 Basel III is a set of regulatory measures addressing capital