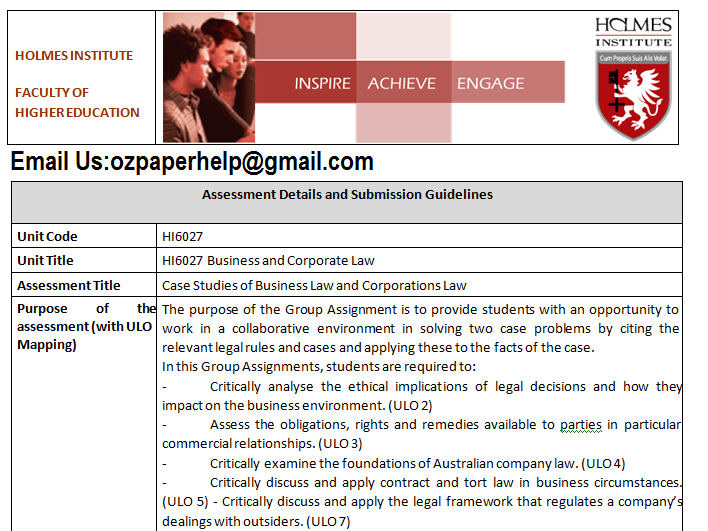 The Group Assignment aims to provide students with an opportunity to work in a collaborative environment in solving two case problems by citing the relevant legal rules and cases and applying these to the facts of the case.

Students are to form groups, with a minimum of 3 and a maximum of 5 students per group. The assignment consists of 2 parts: a 2,000-word written report and a 10 minute (average) in-class or video presentation.

1.    This group assignment consists of 2 parts. Part A is a question on Contract Law, and Part B is a question involving Corporations Law. Both questions must be answered.

2.    The total word limit for the group report is 2,000 words (+/- 10% allowed) with each part having a maximum word count of 1,000 words. Word count limits are strictly enforced. A deduction of two (2) marks will be imposed for every 50 words over the word count for either part of the report. Anything over the word count will not be read by your lecturer.

4.    The group report is worth 10% of total marks for this assignment.

5.    Each group must submit a draft of their report on Blackboard according to the due dates below. If a draft is not submitted, the final report will not be marked.

i.           Read the two alternative Contracts Law questions below and choose one question to answer.

iii.         Your answer must be supported by relevant law and cases decided by Australian courts (preferably the High Court) and/or scholarly articles. A minimum of 3 references are required for this part of the report.

iv.        Your references must be listed in a Reference list at the end of the Part A question.

i.           Read the two alternative Contracts Law questions below and choose one question to answer.

iii.         Your answer must be supported by relevant law and cases decided by Australian courts (preferably the High Court) and/or scholarly articles. A minimum of 3 references are required for this part of the report.

iv.        Your references must be listed in a Reference list at the end of the Part B question.

1.    Summarise your answers for Parts A and B of the group report.

2.    Present and discuss the summary of your answers in 10 minutes (5 minutes for each part).

3.    The Presentation will be done in class or video recording. Your lecturer will advise which is more appropriate.

•       Whether in-class or video presentation, all members must present. The group will be marked down if not all members present.

4.    Video link must be uploaded to a publicly-viewable video sharing platform (ex. Youtube, Dropbox, Google drive) and the video link uploaded on Blackboard.

5.    A video presentation consists of both images and audio. For this reason, a plain Power Point presentation showing slides even with accompanying voice recording is not considered a video and, hence, not allowed.

6.    The group presentation is worth 10% of total marks for this assignment.

•       You must email your lecturer your list of group members and chosen questions by week 4.

•       All group report submissions must be de done online and run through SafeAssign. No hard copies are to be submitted. Only one group member needs to submit for the whole group.

•       Please fill in the “Rubric Group Report” sheet (available in Blackboard under “Assignments and Due dates) and attach as a cover sheet to your group report and upload on Blackboard.

•       Each team member also must also submit to their lecturer a “Peer Evaluation of Individual Participation in Group Assignment” sheet (available in Blackboard under “Assignments and Due dates) with their presentation/video.

•       All reports are expected to observe proper referencing in accordance with the Australian Guide to Legal Citation (AGLC). A copy of the AGLC may be read online for free via this link:

•       In general, for written reports, a SafeAssign similarity percentage of 25% or below is acceptable. Regardless of the similarity figure, all group reports must use in-text citation and observe proper referencing rules.

•       All assignments are expected to strictly follow Holmes Institute’s Academic Conduct and Integrity Policy and Procedures. A copy of the Policy is available on the Holmes Institute home page. (About Holmes > Policies) This policy is also explained in your Student Handbook.

•       Plagiarism and contract cheating in any form will not be tolerated and will have severe consequences for the groups found committing the same, including receiving zero (0) for the entire assignment and possible failure in the entire unit.

Part A: Contracts Law Questions – choose one only Option 1

SOO Burgers is a chain of hamburger restaurants operating in Australia and New Zealand. Sales across the restaurant chain were slow in the last financial year. In order to sell more hamburgers, SOO Burgers ran a competition Australia-wide, which was extensively promoted on radio, newspapers and online. The promotion is called “the Fair Dinkum deal”. According to promotion rules, a token would be attached to the wrapper of every “Double Decker Emu Burger”. If a customer collects 50 of these tokens, they could be redeemed at the counter for a golden scratch ticket. The promotion rules also stated:

“Fair dinkum! Scratch the golden ticket. If it reveals a golden car, present your ticket to the SOO Burgers head office and win the grand prize of a brand new Mazda CX-9.

Michael “Mickey” Morrow was extremely keen to join the promotion and win the car. It also helped that he loves SOO Burgers, particularly the Double Decker Emu Burger. The very next morning after he heard the promotion announced on radio, he rushed to his favourite SOO Burgers branch in Fitzroy. He ordered 50 Double Decker Emu Burgers. Mickey was a man on a mission, and he ate as he had never done before in his life. He passed out from exhaustion and had to be rushed to the emergency room of his local hospital to get his stomach pumped. Luckily though, before passing out, he made sure to redeem his 50 tokens at the counter for a golden scratch ticket.

As would be expected, not all customers were thrilled about going to SOO Burgers and buying a Double Decker Emu Burger just for the chance to win a car. Consequently, many burger wrappers that contained tokens were thrown away in the rubbish bins. Brett Vulture scavenged through the rubbish bins of the SOO Burgers branch at Altona. To collect the discarded wrappers for their tokens. He quickly collected 100 tokens. He went inside the restaurant and redeemed the tokens for two golden scratch tickets. He was ecstatic when he scratched them and found, not one, but two golden cars! He then rushed to SOO Burgers head office in Melbourne, where he presented his winning tickets. The receptionist told him to wait at the reception waiting area. While waiting, an employee came from inside the office and posted a sign on the front door of the office. Curious, Brett approached the sign and read:

“SOO Burgers apologises that because of a printing error, incorrect golden scratch tickets were included in the Fair Dinkum deal. Management is sorry to advise that these faulty tickets are void and will not be honoured.

SOO Burgers thanks its customers for their patience and invite all of them to join its next exciting promotion.”

As Brett looked at the posted in dismay, he spotted another customer who emerged from office accompanied by a SOO Burgers employee. The customer was smiling from ear to ear as he shook the employee’s hand, and said, “I’m so happy to win the car!” It turned out that that customer came in before Brett and presented a winning golden scratch ticket. SOO Burgers honoured his ticket since it had already purchased the only Mazda CX-9 that it was going to give away as the big prize.

In the meantime, while Mickey was at the hospital, SOO Burgers’ announced on radio, newspapers and online that there had been a printing error in the golden scratch tickets. As a result, instead of only one winning golden scratch ticket in the promotion to win the Mazda CX-9, every one in five tickets were winning tickets! SOO Burgers announced that it was immediately declaring that their Fair Dinkum promotion was void and would not honour any prize claims. Mickey did not actually read or hear this announcement. But he overheard some nurses talking as they passed his room about SOO Burgers promotional fiasco and the cancellation of the entire promotion.

Mickey quickly found his golden ticket, scratched it and found a golden car. Thinking that he had not heard anything official from SOO Burgers itself, he discharged himself from the hospital and went straight to the company’s head office with the aim of redeeming his winning ticket. When he arrived, there was a mob of angry customers outside the notice on the front door. As the crowed covered the notice, Mickey did not read it; instead, he approached the receptionist and presented his winning ticket.

SOO Burgers now seeks your legal advice on whether they have to provide (a) Mickey and (b) Brett with the Mazda CX-9s they are claiming. Please advise on Mickey’s and Brett’s positions separately.

Sparkling Pty Ltd (Sparkling) operates three children’s clothing shops in Tasmania. On 8 August 2007, Sarah was appointed to the position of Managing Director of Sparkling for a period of two years. A return was lodged with ASIC indicating her appointment as a director on that date. Sarah was not formally reappointed after 8 August 2009, but she has continued to act as Managing Director. No return was lodged following the expiration of her period of office. The terms of Sarah’s appointment, which were set out in a contract between her and Sparkling, included a restriction to the effect that she was not to commit the company to borrowing transactions in excess of $20,000. Any such transaction was to remain subject to the approval of the board of directors.

On 20 December 2010 Sarah, purportedly acting on behalf of Sparkling, signed a loan contract with Costello Bank, pursuant to which the Bank agreed to lend the company $30,000 in order to establish a eucalypt plantation. The transaction was not referred to the Board.

The Bank was not aware of either:

•       the return lodged by Sparkling at the time of Sarah’s appointment.

The Board has since discovered the loan contract and has stopped all repayments on the loan. The Bank has called in the loan and is suing Sparkling for the principal together with all outstanding interest.

(a)  What do you think the outcome of this case will be?

(b)  What do you think the outcome of this case should be?

(c)  Would the outcome of this case be different if:

(ii)           the bank’s loan officer knew Sarah had fallen out of favour with the Board and was negotiating a new job?