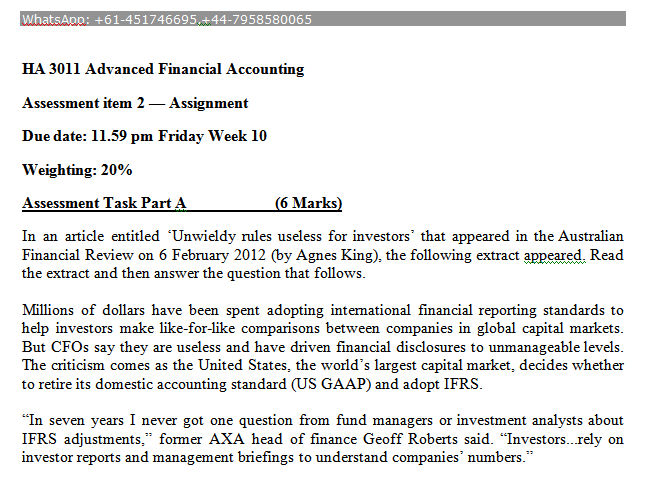 In an article entitled ‘Unwieldy rules useless for investors’ that appeared in the Australian Financial Review on 6 February 2012 (by Agnes King), the following extract appeared. Read the extract and then answer the question that follows.

Millions of dollars have been spent adopting international financial reporting standards to help investors make like-for-like comparisons between companies in global capital markets. But CFOs say they are useless and have driven financial disclosures to unmanageable levels. The criticism comes as the United States, the world’s largest capital market, decides whether to retire its domestic accounting standard (US GAAP) and adopt IFRS.

“In seven years I never got one question from fund managers or investment analysts about IFRS adjustments,” former AXA head of finance Geoff Roberts said. “Investors...rely on investor reports and management briefings to understand companies’ numbers.”

If analysts did delve into IFRS accounts, they would most probably misinterpret them, according to Wesfarmers finance director Terry Bowen. “Once you get into the notes you have to be technically trained. If you’re not, lot of it could be misleading,” Mr Bowen said.

In 2006 the Australian Government established an inquiry into corporate social responsibilities with the aim of deciding whether the Corporations Act should be amended so as to specifically include particular social and environmental responsibilities within the Act. At the completion of the inquiry it was decided that no specific regulations would be added to the legislation, and that instead, ‘market forces’ would be relied upon to encourage companies to do the ‘right thing’ (that is, the view was expressed that if companies did not look after the environment, or did not act in a socially responsible manner, then people would not want to consume the organisations’ products, and people would not want to invest in the organisation, work for them, and so forth. Because companies were aware of such market forces they would do the ‘right thing’ even in the absence of legislation).

You are required to explain the decision of the government that no specific regulation be introduced from the perspective of:

What implications do you think these rules have for the relevance and representational faithfulness of US corporate financial statements?

Many organisations elect not to measure their property, plant and equipment at fair value, but rather, prefer to use the ‘cost model’. This will provide lower total assets and lower measures, such as net asset backing per share.

You are required to answer the following questions:

(a)What might motivate directors not to revalue the property, plant and equipment?

(b)What are some of the effects the decision not to revalue might have on the firm’s financial statements?

(c)Would the decision not to revalue adversely affect the wealth of the shareholders?