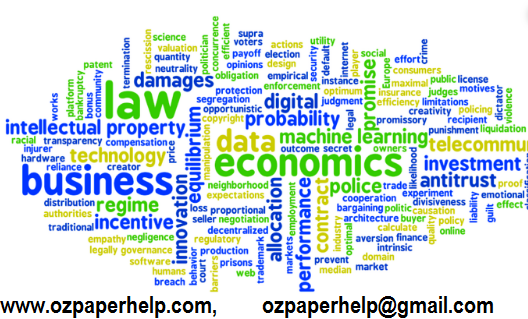 A cashless community reflects that the economic state of financial transactions of that community are not conducted with physical form of money such as banknotes or coins. This represents that the respective country is technologically advanced that is economic structure is stable of that company. Digital implication can make economic operations faster, as the transactions can automatically recorded with the help of technologies. However, in case of cashless transaction some issues can appear to resist the proactive attitude.

Evaluation of cashless debit card claims that the trial may be changed in the community; however, the methodology of implementing cashless debit card is questionable. In that case, the respective government ministers of Australia have evaluated the economic effectiveness of using cashless debit card payments. It has been found that, cashless transaction can controll the issues related present welfare policies. These policies have been set with the assistance of a systemic enabler relaed to free-range gambling, alcohol abuse, and drug use. In that case, it can be said that Cashless Debit Card Trial is a significant innovation of the joint federal government of Western Australia and South Australia. This is helping the respective governing bodies to track the socioeconomic disadvantages, health, and well-being of the relative communities[1]. Furthermore, Australian Government has become able in enhancing the social security. This is helping people in managing the income and financing. This means, the respective innovation is not an exacerbation to economic insecurity, as the economic payments have been secured by keeping the amount same. However, it has limited the transacting amount, which has prevented per day expenses of every Australian. In relation to this, it has been found that about 33% of free-range gambling, alcohol abuse, and drug use with the use of Cashless Debit Card Trial.

b) Consistency with the standard economic argument

Cash transactions have been known as unconditional, which reflects that cash is freedom of choice. However, in case of cash transaction, it is known that keeping records of transactions is comparatively difficult and time-taking tasks. On the other hand, payment in kind (PIK) represents the public spending, which is related to help a particular population. In the case of Australia, it has been known that the PIK is taken into account in order to enhance the social security and welfare of the communities[2]. With the help of that, the respective country has effectively reducing the rate of drug or alcohol uses as well as free-range gambling. This has become possible with the assistance of cashless transaction, as the respective government has put a limit on cashless transactions.

a) Ethical framework of cashless payments

It has been known that the Cashless Debit Card Trial is aiming at testing the range of social harm that are caused by drug uses, alcohol use, and gambling. Therefore, the ethical considerations are developed for the trial to reduce the rate of misusing the above mentioned elements. In that case, the respective government of Australia is placing the portion at 80%[3]. However, the ethical framework that is hindering under the cashless transactions is consisting of the following factors:

●       Employment programme for development of the community

●       Inspiring the people for Payment-in-Kind

b) Reasons for the cashless debit card to be worse off

In case, if the people using cashless debit card has been found worse off as compared to be able in allocating their expenses, then the transactions are not to be used by the respective government. This is because the CDCT is applicable for the people under disability, carers, parenting, youth payment allowance, and unemployment. People with aged pensions, on the veteran’s earnings, and the respective payments get the facilities of this trial[5]. In relation to that, it can be said that the respective government may be unable in enhancing the health and well-being of the people under poverty, disabilities, or unemployment. From the governmental actions of the Southern and Western Australia, it has been understood that the respective trial is disproportionately targeting Indigenous people, instead of the government’s claim. Therefore, the card should have been made available for both the Indigenous as well as Non-Indigenous recipients for welfare.

Q3. Arguments over the presented ethical framework for cashless payments

As per the ethical framework of the Cashless Debit Card Trial of Australia, it ha been determined that the trial is aiming only at reducing the rate of abuses with respect to gambling, uses of alcohol, and uses of drugs. In that case, it can be said that the health and well-being of the respective people may be neglected in this case. Due to disabilities, unemployment, and the other mentioned reasons, respective people may have been tending to stay within can unconscious lifestyle[6]. Such lifestyles are hampering the manpower of the respective country. In that context, it is the responsibility of the respective government to integrate the health conditions of the concerned people along with social improvement. Nonetheless, it has been found that the considered trial is oriented to the interventions of increasing social security for both the indigenous and non-indigenous people.

Q4. Arguments over the opposing ethical framework for cashless payments against the presented one

In relation to the above argument, the Australian Government may have the responsibility is to implement this benefits of Payment in Kind to the Northern Australia. With the assistance of that, the respective government may have brought the proportion of secured sharing about 80%. Apart from that, it is identified that the trial of the Cashless debit Card is continuously increasing the hardship with the respect to the lifestyles of the concerned people[7]. In accordance with the design of this trial, it can be said that the disorganised experiments as well as ill-conceived implementations are made in line with the CDCT. Apart from that, the respective country and the government may have the needs of bringing both the communities into same circumstances. This may have helped the Australian Government in monitoring the socioeconomic disadvantages as well as issues related to health and well-being of the relative communities. Furthermore, Australian Government has become able in enhancing the social security.

With respect to the ethical concerns of the Trial, it has been derived that the Australian Government is focusing on reduction of abuses such as gambling, drugs, and alcohol uses. In that context, the respective government has posed a limitation with respect to the cashless transaction in the respective country. This CDCT has been made available for the people come under disabilities, parenting, unemployment, youth payment allowances, and many more. This card has quarantines 80% of the entire payments for social security to the people within the age group 15 to 64 that is the working-age people[8]. This trial is made in order to restrict the transactions with respect to purchase of illegal drugs, excessive alcohol, as well as gambling products or services. Therefore, it can be said that the income or finances of the unemployed people can be controlled with the help of this trial. It has been known that, if anyone spends more than 20% in purchasing alcohol and drugs, the critical issues in financial management can be seen[9]. As per this reason, the respective government has brought the benefits of payment in kind for improving the lifestyles of every individual.

[4] Gillies, Sam, and SKoT McDonald. "Noizemaschin!!: A new model of live performance in Perth, Western Australia from 2011 to the present day." In Soundscripts: Proceedings of the Totally Huge New Music Conference, pp. 53-62. 2015.

[7] Mendes, Philip. Empowerment and Control in the Australian Welfare State: A Critical Analysis of Australian Social Policy Since 1972. Abingdon: Routledge, 2018.