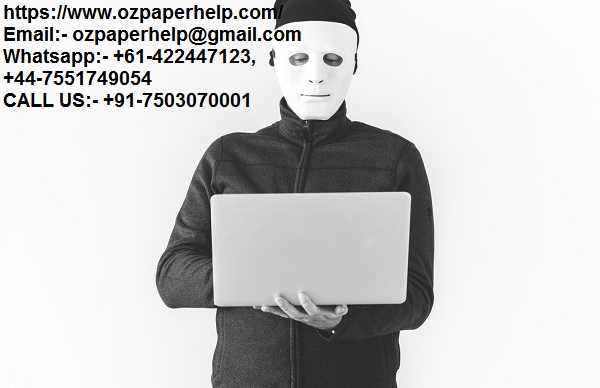 Cyber security is becoming one of the main concerns to a large number of organisations. In Australia the rate of cyber crimes are increasing at an alarming rate and it is turning out to be biggest challenge. It is important for a company to identify specific threats that are faced by a company regarding their system's security. There are agencies who work for protecting systems from security threats. This study is going to shed light on the increasing threat of cyber crimes in Woolworths. There will be an attempt to analyse cyber risks. Australian companies are undergoing threats, which are creating havoc in their business. These vulnerabilities will be discussed for Woolworths. Woolworths is a retail company and need to secure their systems from cyber risks.

Analysis of risks of cyber security for Woolworths

Survey conducted by PwC has found that Australia has largest number of cases of cyber security risks. Most of the companies use emails for their communication. The attackers are making use of email for their advantages. It has been found that Phishing is one of the major problems faced by Woolworths. The authorities of Woolworths have found that more than 30 percent of emails are phishing messages. Cyber criminals are targeting employees (Talamanchi et al. 2015). In Woolworths, employees are receiving mails that have been send by their CEO, however a close investigation to those emails have  shown that they were actually sent by cyber attacker. There are some cases where attackers request for transfer of wires in order to get confidential information.

Recently Woolworths has tried to identify risks that are violating their systems. I such situations it is quite important to educate staffs regarding cyber crimes so that they do not reply to fake emails. In order to prevent security issues, Woolworths is taking help from cyber intelligence. It is quite essential to invest in detecting systems for fake emails. Woolworths is trying to analyse reputation of fake emails. It has been found that attackers are going to make use of more advanced strategies for targeting companies. They are making use of  malware through the medium of email. The cyber attackers conducts a thorough research on the personal detail of employees for convincing them or clicking on links that can be used by them for getting access to important information.

Cyber intelligence who have appointed for identifying risk to system at Woolworths are trying to combat with security risks by adopting various strategies that could control such attacks. The cyber investigators are of the viewpoint that attacks cannot be controlled only by spreading awareness among employees rather the companies are required to install security software for coping up with cyber crimes (Herrera, 2017). It can be done by identifying email address before employees in their inbox receive them. Woolworths require a detection system because it is often found that HR while checking CVs of candidates are at a risk of opening a document that might pose a challenge to their system’s security.

A proper detection system requires a safe and reliable cyber security infrastructure that comprises of system hardening, procedures, system patching and training.  Woolworths should try to invest on cyber infrastructure for preventing their systems from cyber attackers.

Vulnerabilities   faced by Woolworths in their computer network

Woolworths is facing threats from cyber crimes because most of their emails have been hacked. It has been found that employees of Woolworths are receiving mails and as soon as employee began to open the email, their system gets hacked (woolworthsgroup.com.au, 2017). The confidential information of this company is passed on to hackers and it is creating a bad impact on their business. The reports given by cyber crime officers indicate to the fact that if it is not detected then it can degrade the brand image of Woolworths. Even customer's data are hacked by attackers. The hackers are trying to attack those companies who are able to store huge data. Woolworth had to handle a wide range of data of their customer, employees as well as their funds and so it fall an easy prey to cyber attackers. The company has taken steps for protecting data of their customers by warning them not to provide any sort of personal information to any email from company. It has been found those customers are receiving emails asking for their personal details. Customers are losing faith in this company due to such fake emails.