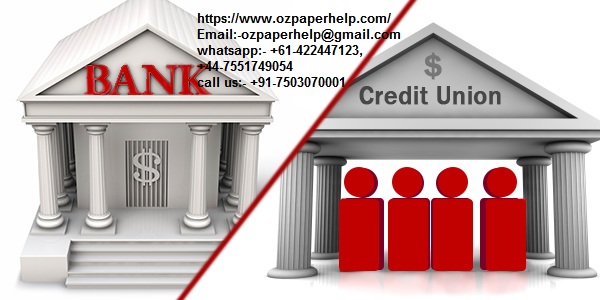 Credit Unions and Banks both are institutions that offer financial products to the consumers but there exists major differences between the two. A credit union is a financial co-operative organization formed by group of members whereas banks are formed under a national regulation or central bank(NATIONAL CREDIT UNION ADMINISTRATION, 2007). A credit union is generally formed by a community of people who share a bond of association generally based on common location, religion, education, social interests or other factors(O'Sullivan, &Sheffrin, 2003). The members of credit union are customers as well as owners. The members in credit union can be individual volunteers to institutions with asset worth several billions of Dollars. The sole objective of credit unions is to promote thrift and work “not for profit” but for service.They are not ‘non-profit’ or charity organization but they operate to serve its members than to maximize profit(Colley, 2017). In contrast, banks are profit oriented financial institutions controlled by stockholders. The major motive of banks is to generate revenue and maximize profit to pay higher return on investment to shareholders(Goldstein, 2017). Since, credit unions work on not for profit policy they provide higher interest rate on deposit accounts as compared to banks which follows the rate of interest regulated by central bank or national regulation. Similarly, credit unions also provide other financial products like banks such as loans, credit cards but at lower interest rates than banks. Also, credit unions charge lesser fees or free of charge for overdraft or bounced cheques, monthly maintenance, withdrawalsand electronic transactions as compared to commercial banks.

Credit unions are controlled by unpaid volunteers elected by its members. The person who deposits a certain amount in credit union becomes its member automatically and gets a authority in decision whereas the proceedings of banks is managed by paid directors who are elected by shareholders(Goldstein, 2017).

In spite of the fact that credit unions follow easy rules and provide better rates than banks, there are various cons of  credit union functioning. As compared to commercial banks, credit unions offer less financial products such as types of loans, accounts and saving schemes therefore, member has very few options to choose from. In larger banks, a person can choose from various options which suit him the best(Woodruff, 2014). Moreover, credit unions have very less number of branches at specific locations which creates inconvenience for the members whereas larger banks have branches at almost all locations which makes operations easy for the customer(Allred, 2001). Also, credit unions operate for lesser business working hours due to their smaller structure which again is a limitation as compared to commercial banks. Unlike banks, which provide plentiful ATMs open on holidays and weekends, credit unions have poor accessibility as they are meant to serve local community members. In addition to that, unlike banks, credit unions are smaller with few employees and offer poor online banking options which make it difficultfor the members to use the services(Colley, 2017). Most commercial banks have robust websites and offer 24 x 7 online customer services, which is helpful for those who have busy schedules. However, in terms of safety and reliability, both the institutions keep your money safe(Colley, 2017).

To summarise, credit unions are member focussed financial institutions which provide basic banking services at lower fees and better rates for the members who simply require cash deposits, bill payments. The members get personalised services and save many dollars as the fees is very low as well as interest rates are low on loans and credit cards. But credit unions are not for those who require specialised financial products and advanced online banking services. While national banks offer branches at national locations and easy and free access to ATMs, credit union does not have such facilities.

Colley, A. (2017). What Is a Credit Union vs. a Bank - Differences, Pros & Cons. Moneycrashers.com. Retrieved 6 April 2017, from http://www.moneycrashers.com/why-credit-unions-are-better-than-banks/