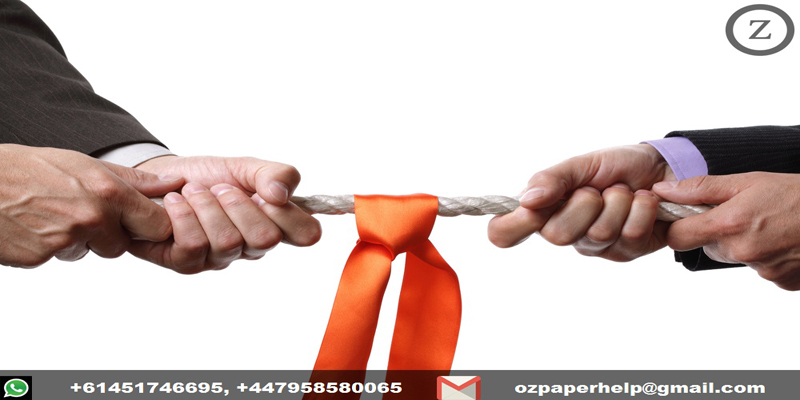 The conflict is based on misconceptions and misunderstanding of role of respective persons included in company. The "S1" is the senior most scientists in the company who has been working for over 5 years independently in the lab and also in other fields of the company. In addition to that, he had more 80 years of experience as a laboratory manager and 14 years as a scientist. On the contrary, the other person "S2" is involving in the conflict that is employed as a technical officer and is the junior staff of the company. The conflict is based on the arguments regarding the positional behaviour of the respective employee. However, even the senior employee is quite rude and shows aggressive behaviour towards his juniors. Thus, the juniors have started de-motivated due to his inappropriate behaviour of their senior. Then S1 and S2 decided to complain against each other and placed the complain letter to the Human resource manager of the organisation.

As per this theory, the accommodation is the alternative of competition in which the involvement of both S1 and S2 are required. It has been noticed that main issue of these people is the over assessment of their standard. It can be stated that by eradicating the selfless feelings and started to accommodate other’s concern can help the people to achieve better collaborative working strategy (Tsai and Bendersky, 2015 p.143). A polite and respectful tone at communicating time can mitigate the issues between them. As staff S2 is a junior staff member comparatively to the experience years of senior staff member S1, the behavioural approach should be portrayed as a respectful co-worker of him towards the senior staff member S1.

As per this Principle, S1 can avoid the minor mistakes of S2 and can train him according to their professional needs. Apart from this, S2 Can avoid being harsh in certain situation and can talk in diplomatic way in order to healthy workplace in the organisation. However, it should be remembered by both of the staff member S1 and S2 that at the end of the day they have to work together for producing the assumed outcomes of the company as expected. So it can be most effective for them by avoiding each other for some days at a workplace. On the contrary, over avoiding can cause issue in the quality of production as the junior fellow might get issue in order to learn new things from seniors (Gounaris et al. 2016 p.4001).

It is observed that the personal internal communication between the senior staff S1 and junior staff S2 of the organisation will raise a serious issue of confrontation against each other. Collaborative approach is the most significant team work strategy which the senior conduct effective leadership instead of conducting bossy attitude. However, in this way the concerns of both S1 and S2 can be met and they can find satisfaction in work. An effective collaboration will help them to resolve the current issue and reduce the risk of future conflict among the scientist and the technical officer

Competing can be implemented with the "win-lose approach" between the senior staff S1 and junior staff S2. However, this competition denotes warm and productive approach that can be taken place among S1 and S2. With the help of this competition, skills of both S1 and S2 can be elevated. The laboratory manager also ensures that the conflict is managed between them. This means two staff will work and finish the job accordingly to the job requirement but in a competitive manner of approach.

Compromising principle is quite synonymous to the accommodation principles although has different role in case of S1 and S2. In this case, competition refers to standing on own rights but in polite manner without harming other’s emotion.

2.4 Areas of improvements of conflicts-

The conflicts style is different among the various workplace and the employees.

There should be a platform for S1 and S2 for their problems and there must have authority that will work for solving the problem by expert advice.

Empathy- It mainly values the emotions of the S1 and S2 and help them by proper judgment. This method will help in the judgment of the confliction by understanding the situation from the viewpoint of the victim. This method proves effective in the workplace when carried with emotional attachment, deep thinking, and other concerned matters. Moreover, the best method is creative methods for solving the conflict by identifying the reason behind the problems.

Respect the hierarchy-Also by implementing the new techniques that will create friendship among the workers can solve the conflict. Even, showing respects towards the senior staff and giving appraisals for the best performance can be helpful to reduce conflict. The seminar can be used to be conducted to teach good behaviours to S1 and S2 and different techniques of building good relations (Currie et al, 2017, p.495). Here as the S1 is more senior so S2 have to show respect towards him. Accordingly, S1 should also have to behave properly with his juniors that are S2 and guide them properly.

Proper surveillance management- Even, monitoring the employee's behaviours through the day using CCTV can be helpful in reducing the conflicts.

Create good relations among employees-Apart from that the response towards a conflict in the friendly can be solved many problems. The method of gathering the team and then understand their problem directly will also help in solving conflicts (Riasi and Asadzadeh, 2015, p.615). In addition to that, the impartial behaviour can also reduce the chances of conflicts. Another valuable method is organizing teamwork and motivating the staffs for their goals.

Broadcasting the appraisals- By organising the functions and reward the best performers and team can help in conflict management. In addition, the recognition for the model of the teamwork can encourage the S1 and S2 to work as the team.

Teamwork management- For the growth of the company teamwork plays a vital role. Therefore, the organization should construct a team and encourage them towards a common goal (Benner, 2016, p.289). This is most effective techniques that will reduce the conflict by creating friendly relations among S1 and S2.

Impartial decisions- The organization should not take one-sided decisions, as this will creates more violence among the workers (Currie et al, 2017, p.495). The company should look after the total matters and judge accordingly may help in reducing the conflicts.

It is observed that there are serious issues can be generated for implementing five conflict-handling styles for conflict management resolution.

It can be observed that collaborating principle can be proved as less effective factors for improving conflict management system as the completion time of whole procedures is very long. Further, it will require a huge patient level of staff S1 and staff S2 to implement this for mitigating the issue between them. After that, anyone else of them in the organization can take advantage and hurt them by observing the simple and innocence nature and behaviour of them.

In this issue of implementation for this conflict management resolution factor, it can be observed that both of them i.e. senior and junior staff personal views will be avoided to for fulfilling the objectives at a workplace. Accommodating principles will be implemented as a loose win approach between both of the staff members in the time of improving conflict management regulation management (Anicich et al. 2015, p.123). So as a result of that anybody’s personal emotions and individual attachment with the workplace can be hampered. Moreover, the individual credibility of S1 for being a senior scientist will be affected for the better interest of the company.

It can be assumed as a serious issue for functioning to avoid principles between staff S1 and S2 to solve the personal problem of them. As per Gounaris et al. (2016, p. 4000), it may generate more frustration, management and bitterness between this two staff member when they will observe that they are trying to avoid each other. On a serious note, it will lead them to make a further complain against each other towards the HR personnel of the organisation. As it is observed that it was a medium level of an issue to make a confrontation against each other in the communicating time. But this kind of avoiding behavioural approach can create a serious issue between them.

Competing also may generate a serious issue between staff member S1 and Staff member S2 as it is an approach of win-lose theory. The independent way of working of senior scientist S1 may create the further confrontation when his junior technician staff will understand that his senior staffs are passively avoiding him. According to Friedman and Rothman, (2015, p.50), it can seem an ego base behavioural approach of the senior staff towards its junior staff S2. So it will make a further confrontation between them.

It may have happened that both of the staff members S1 and S2 can be derived from the prime objectives and the morality factor of thinking can be ended for implementing these principles. Further, this principle will not function if anyone's demand of them will excessive than the expectation level of negotiating for reducing own value and giving views to construct a decision.

It can be concluded at last that proper identification and handling the personal emotions of both the employees in the organisation can be mitigated. The personal confrontation issue between senior staff member S1 and the junior staff member S2 are of less severity and should be treated with proper guidance by the laboratory manager.

The conflict management system helps in improve way management for verbal and nonverbal communication in the organisation. This means both the staff member S1 and S2 have to left their ego outside of the workplace and create a mutual cooperation and between each other for the better interest of the organization. It should be ensured that the personal influence and generosity towards junior team members cannot be lost on side of a senior employee like S2 here.

Friedman, V.J. and Rothman, J., 2015. Action Evaluation: An Action Research Practice for the Participative Definition, Monitoring, and Assessment of Success in Social Innovation and Conflict Engagement. The SAGE Handbook of Action Research, p.90.

Riasi, A. and Asadzadeh, N., 2015. The relationship between principals’ reward power and their conflict management styles based on Thomas–Kilmann conflict mode instrument. Management Science Letters, 5(6), pp.611-618.

Woodrow, C. and Guest, D.E., 2017. Leadership and approaches to the management of workplace bullying. European Journal of Work and Organizational Psychology, 26(2), pp.221-233.