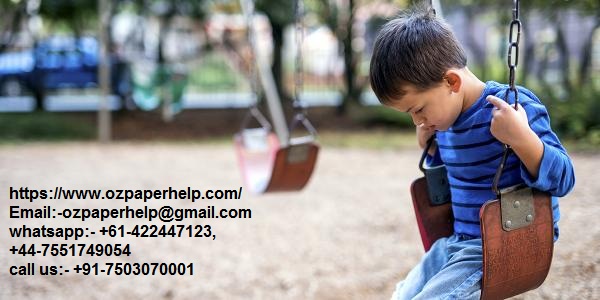 THE LONG-TERM  EFFECTS OF CHILD SEXUAL  ABUSE ON MENTAL HEALTH

Child sexual abuse (CSA) is a form of child abuse in which an adult or older adolescent abuses a child for sexual stimulation. Sexual abuse refers to the participation of a child in a sexual act aimed toward the physical gratification or the financial profit of the person committing the act. Forms of CSA include asking or pressuring a child to engage in sexual activities (regardless of the outcome), indecent exposure of the genitals to a child, displaying pornography to a child, actual sexual contact with a child, physical contact with the child's genitals, viewing of the child's genitalia without physical contact, or using a child to produce child pornography. Selling the sexual services of children may be viewed and treated as child abuse rather than simple incarceration.

Effects of child sexual abuse on the victim(s) include guilt and self-blame, flashbacks, nightmares, insomnia,fear of things associated with the abuse (including objects, smells, places, doctor's visits, etc.), self-esteem difficulties, sexual dysfunction, chronic pain, addiction, self-injury, suicidal ideation, somatic complaints, depression, post-traumatic stress disorder, anxiety, other mental illnesses including borderline personality disorder and dissociative identity disorder, propensity to re-victimization in adulthood, bulimia nervosa, and physical injury to the child, among other problems. Children who are the victims are also at an increased risk of sexually transmitted infections due to their immature immune systems and a high potential for mucosal tears during forced sexual contact. Sexual victimization at a young age has been correlated with several risk factors for contracting HIV including decreased knowledge of sexual topics, increased prevalence of HIV, engagement in risky sexual practices, condom avoidance, lower knowledge of safe sex practices, frequent changing of sexual partners, and more years of sexual activity.

In the United States, approximately 15% to 25% of women and 5% to 15% of men were sexually abused when they were children. Most sexual abuse offenders are acquainted with their victims; approximately 30% are relatives of the child, most often brothers, sisters, fathers, mothers, uncles or cousins; around 60% are other acquaintances such as friends of the family, babysitters, or neighbours; strangers are the offenders in approximately 10% of child sexual abuse cases. In over one-third of cases, the perpetrator is also a minor.

In 1999 the BBC reported on the RAHI Foundation's survey of sexual abuse in India, in which 76% of respondents said they had been abused as children, 40% of those stating the perpetrator was a family member.

When Beverly Young Nelson described the fear and powerlessness she felt as a 15-year-old girl who, she asserts, was groped and assaulted by GOP Senate candidate Roy Moore decades ago, it resonated with Sylvia Goalen, a 37-year-old survivor of childhood sexual abuse.

Like Nelson, Goalen kept what had happened to her a secret for years, fearful that her abuser had the power to hurt her and her family.

But it wasn’t just the fear and secrecy that felt familiar. Goalen also saw her own story mirrored in the account of Leigh Corf man, now a 53-year-old customer service representative. Corf man told The Washington Post she felt “responsible” for Moore pursuing her, at one point driving to her home and undressing her. Corf man and Nelson are two of nine women who have now come forward with accusations against the Republican candidate.

“It set the course for me doing other things that were bad,” Corf man told the Washington Post, adding that she began drinking and doing drugs in the years following the incident. She attempted suicide when she was 16 years old.

This lifelong sense of being “tainted,” or carrying a legacy of shame — along with behaviour or choices that are informed by this feeling — will sound familiar to many adults who faced sexual assault in childhood or adolescence.

“What we know from studying adverse childhood experiences is that it can impact an individual’s long-term mental and physical health and well-being,” Laura Palumbo, communications director for the National Sexual Violence Resource Centre, told HuffPost, “as well as their economic well being and even their life expectancy.” Research suggests that children who are exposed to multiple forms of trauma have reduced lifespan by up to 20 years.

While the occurrence of sexual violence in childhood by no means consigns a person to a particular destiny, studies have shown the health effects can be and often are profound and far-reaching. The substance use and suicidal tendencies that Corf man described align with a robust body of research on childhood sexual assault victims in later life.

Goalen, who now works as an advocate with Darkness to Light a nonprofits dedicated to preventing child sexual abuse — says that once her family moved to the United States, the assault stopped, but its effects did not.

Australian Bureau of Statistics. (2004). Sexual Assault in Australia: A Statistical