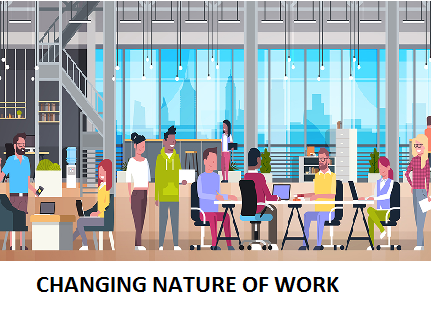 Now that you have watched the mini lecture, you can learn more in the Essential reading for this topic.

You’ll notice that you read Chapter 1 of Pilbeam and Corbridge back in Topic 1, but it’s worth revisiting the section on changes in the world of work again as we look at this in more depth in this topic.

Remember that all the Essential reading for this programme is provided for you. Click ‘next’ to go to the next page and start reading.

THE CHANGING WORLD OF WORK AND CONTEMPORARY HUMAN RESOURCE MANAGEMENT

The competitive environment is a major driver of change in the world of work:

The pressures on organisations to add value, achieve sustained competitive advantage, and respond and adapt quickly and flexibly to new challenges and opportunities are relentless. The responses to these pressures have taken many forms, including new types of organisation, lean, delayered, flexible, process- or project-based, increasing reliance on information technology, and an emphasis on continuous improvement in terms of performance, quality and customer service. The quality of the human or intellectual capital possessed by organisations is seen generally as the key factor in differentiating them from their rivals and achieving superior results. The focus is on the development of business strategies to achieve longer-term goals, and the part played by human resource strategies in general, and reward strategies in particular, in supporting their achievement is now well recognised.

Organisational fluidity and transience, the ‘here today gone tomorrow’ perspective, has impacted on employees’ feelings of job security. While it may still be statistically possible to demonstrate that in many cases jobs are relatively secure, the expression of organisational and environmental uncertainty, together with the managerially projected imperative of adaptation and change, together with the global recession of 2009, have impacted upon employee perceptions of job permanence. It has also impacted upon the mutuality of obligation between employer and employee with regard to traditional career patterns. The end of the job for life may have been subject to hyperbole, but career patterns are different and twenty-first-century workers may need to engage in continuous development and the refurbishing of skills in order to maintain employability. This tends to promote a loyalty to self rather than intensifying loyalty to the organisation. Worker loyalty may therefore have to be purchased by the employer through the currency of self-development opportunities.

Although phrases like ‘the customer is king’ and ‘delighting our customers’ can be accused of being trite, there is little doubt that, among other things, organisations have had to become more customer-focused in order to survive and prosper in competitive environments. Excellence in customer service has always been a differentiating factor, but perhaps what is different now is that customers have had their expectations fuelled and are encouraged to feel empowered to demand quality products and good service. Customers are also more inclined to exercise their power through either the withdrawal of custom or the pursuit of compensation or restitution. Philpott (2001) sums up this customer power: ‘intense competition in global and domestic markets forces businesses to keep labour costs in check and/or raise their game in terms of product quality, because empowered consumers want ever-better goods at ever-lower prices.’ This rise in customer aspirations is not only a private sector phenomenon, because citizen consumers of public services have also been encouraged, principally through public policy, to perceive themselves as fully fledged customers.

The war for talent and the new paternalism

Where shortage labour markets exist they confer power to workers, as sellers of their labour, and enable a greater degree of choice to be exercised over whom to work for and on what terms. This is one element of the war for talent − employers having to compete with each other to secure their human resource needs. The war for talent goes beyond this, as the name suggests, and it is argued that in order to survive in competitive product and service markets employers need to attract and retain the most talented workers, even in difficult macroeconomic conditions. It is through securing the expertise, creativity and innovation of talented people that the organisation will prosper. In service-based and knowledge economies employees are not only the major operating cost but also the source of competitive advantage. Studies by Goleman in the USA, reported by Brown (2001), found that in low-skill work the highest-performing workers contributed twice to three times as much as average workers, while in professional jobs top performers were capable of adding ten times as much value as their co-workers. Kets de Vries, in summing up the competition for talent (Williams, 2000), created an interesting metaphor: ‘Today’s high performers are like frogs in a wheelbarrow, they can jump out at any time.’ The implication is that organisations need to prevent talented employees from escaping. To extend the metaphor, this does not mean putting a lid on the wheelbarrow, it means making the wheelbarrow a sufficiently attractive place to stay. This attractiveness cannot be defined in any generic way because this rather depends on what the frogs want.

•      seizing opportunities provided by the labour market to recruit key talent; and

•      increasing the focus on employee retention,

whilst subjecting cost-effectiveness to greater scrutiny. There is no escape from contingency in talent planning, even in a recession. Surplus labour markets confer power on employers, and whilst the war for talent may pause during a recession, at some stage it is likely that ‘employers will be faced with skill shortages, an ageing UK population and limits on immigration’ (Taylor, 2009) and the power balance may change again. This view is endorsed by the Economist Intelligence Unit (2008):

Finding and retaining talent is tough and is going to get tougher. While a global economic slowdown, with its attendant lay-off, may provide temporary respite in some industries, falling birth-rates, an increasingly demanding workforce and greater competition for talent from emerging-market firms will continue to pile.

We have endeavoured to draw attention, no more than that, to a number of contextual features in the changing world of work and by way of summary these are listed, with others, in Exhibit 1.1. These have been given limited treatment in this chapter principally because further changes in the world of work might render them obsolete. It is up to the informed practitioner or manager to keep up to date and be