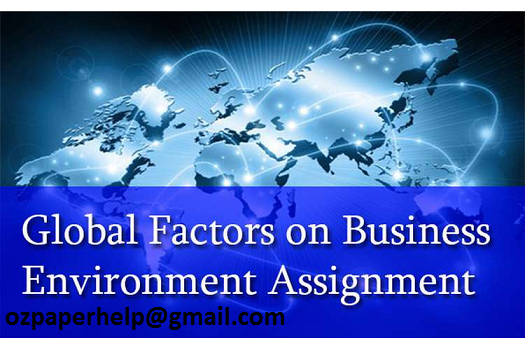 The company that has been selected mainly to cover the impact of its functions on the global trading activities, is Oman’s based company called “Global Corp enterprise LLC”. The company is based and has been originated in the Sultanate of Oman, and is a company that is famously known for running to provide and distribute a total of all the hardware and solutions for the systems and software. This company is focused technically to help the regions and countries nearly to avail the hardware and the software that they would probably not get in their country. This is a global trading company, which has been. The company has been proud to represent the Sultanate of Oman in the international market and has made a good name in the technical software providers list. This has given the upper hand to the company to reach a larger target market.

To be able to serve a larger market means that the overall customers will increase, leading to a higher demand within the market. The more the company sells its devices internationally, the higher will be its sales revenue and thus the overall market share will also increase. The customers of the company are all reputed distributors, major contractors and Government authorities like MEDC, MJEC, MZEC, OETC, RAECo, Ministry of Defense, etc. The many factors come into play when the businesses it organizations from itself a developing nation like Sultanate of Oman are emerging to become a well-known international or global company. In this scenario, just like any other company that becomes globalized, the factors like social, political and other technical factors come into play. We will analyze how the company “Global Corp LLC” dealt with all the aspects and Hale far have they reached in terms of an uprising and enhancing their work profile internationally.

The social factors that were specifically faced by the company were considered and researched by first analyzing the countries that the global Cop LLC usually deals with and serves. We analyzed that the company usually deals and serves the neighboring Middle Eastern markets. This is because some of the Middle Eastern countries are emerging and since they are becoming modern and the growth is prospering the overall target to reach to the betterment in terms of the advancement inter technological sector is also increasing. Considering the higher demand is from the societies that are usually Arab based, does not really create much of the hindrance for the company to be able to compete or deal with the business customer in other Middle Eastern nations. This is because egg social and the cultural values in many Arab countries are almost the same. And thus the company also does not have to really bother about the language barriers that come to the ways of the companies during the international customer market. This has always saved them time and costs as well.

The technological and technical issues that might arise when dealing with the business and trade in international markets are usually to do with the ease and the efficiency of running and operating the business within the international market. This then brings us to the point that for a company to be able to serve or transfer its good and services In a completely new market and in an international market, it will be if the utmost importance that the company has the ease of transferring and selling the goods to the customers in the other country as the ease of the traveling and the ease of conveyance matters the most and this contributes to the overall cost of the transporting and delivering the products to the international market. However, the company has faced these issues in dealing with its customers in markets which are countries that are under-developed. In extreme cases, the costs that the Global Enterprise Corp LLC has faced is extremely higher and the profits that are yearned in this case by the company is usually lower than the profits that they would otherwise have earned if they were to deal with the companies in the developed countries. This is because their country’s infrastructure allows for an easier yet very suitable form of the conveyance and the transportation that takes place within the market. (Miichelle, 2017)

The political matters come up front with the businesses that plan to run their operations in the extremely new and international market. In this case, it is important that the businesses try and learn about the legal and the political implications that take place within the market. This means that the countries that have a relaxed political environment will be faced to have more and better multinational companies operating within the market. This shows that the biggest hurdle that is faced by companies that go global is that if the political issues that arise and that are faced by the companies. (Naser, 2018).

1) The geographical location of the GCC countries is very much approachable by the other markets as well.

3) This is why it is also easier for GCC countries to be able to hire workers who are cheaper in terms of their costs and thus be able to cut costs down of the production etc.

4) This also increases the overall likelihood of the profits that are made by companies. Thus, companies prefer to run businesses in countries like GCC countries.

5) These countries give benefits to the business regarding the cost savings. This is because the countries can make a huge profit and yet not be able to pay taxes.

6) This means that the businesses are not charged any taxes and corporate taxation along with the personal taxes are all zero in these countries. This is why many countries that target to make huge profits prefer in staying and operating in countries which have no policy and charge of higher taxes rates. (Houcine, 2015)

8) The countries that are considered the GCC countries are all the newly emerging economic markets. They have increasing demand and this shows the overall economies have started to consume more than they spend in the market. This shows that for a business the market that consumes more than it saves is a bigger investment.

9) The businesses that operate in the GCC countries also benefit from the political ease that the GCC countries have with the other political governments of the developed countries. This means that they can further invest in the European regions too, and will not face issues regarding the operations and the functions of dealing with the business in the European regions. (Mathews, 2017).

1) The countries have the barrier of dealing with languages that the businesses will have to be faced.

2) This means that the countries usually only prefer the Arabic language.

3) This would mean for the international companies that have clients and the employees from different countries will face barriers of language. (Salem, 2017) The countries are also very limited in terms of the consumption.

4) The products and the services that are demanded in the markets of the GCC countries are also very limited. This means that the country has the market for luxurious consumer goods.

5) So for a company that deals with the services of the technical goods will probably not do well in these GCC markets. Moreover, these countries also have been facing the tensions of the political decisions. This means that the immigration laws and the strictness of travelling in these countries is getting stricter.

6) Full range of ultramodern and sophisticated banking sector providing a variety of services for its wealthy expatriate clientele. Banking system is so private that it is now often compared to that of Switzerland. High-end telecommunication facilities and IT infrastructure. Efficient transport and distribution facilities.

7) Well-planned amenities – roadwork and waterworks. All these are factors and elements of the developed nations.

8) Not all the cities and all the companies are not really targeting the infrastructure of their countries. Thus the importance of the businesses are not so up to the point in these countries. (Hafsa, 2018).

The plans to expand a hotel industry in another GCC country considering many factors that will determine the ease and thus the efficiency of running the operation in such countries would be to target a country which is emerging and this has a market that has increased and higher demand for the hospitality. This will also mean the tourism in such a country should be more than the usual competition in the market. Thus, I would like to be able to expand the operations of the hospitality organization to Kuwait. This is because the overall concept of the traveling is also increasing in this country plus the bargaining power thus the purchasing power of the individuals of the country people is also more than the purchasing power of the employees is different other countries. Thus it makes more sense to expand in a country which has a higher market for the demand of the service that will be introduced in their market. For this specific reason, my answer would be to target Kuwait. (Houcine, 2015).