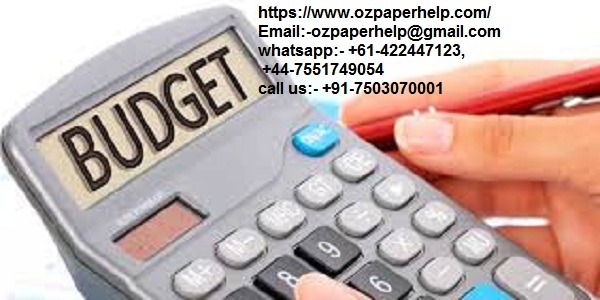 Budgeting is the very essential part for any kind of organisation, which is governmental or nongovernmental organisation.  Any institution running depends on how they budgeting its regular activities. “Australia’s economic performance” has been exceptional, It has enjoyed one and a half decades uninterrupted financial growth. In the last few years, countries annual GDP growth is 3.5% of total economy (Herndon, Ash & Pollin, 2014). Australia’s economy performance has been attributed most the two principle factors first, the structural reforms starting from mid 1980’s and another is prolong boom community demand and prices led by the other developing countries  which is currently the major driver national growth income and investment. Reduction in tariffs .For budgeting perspective look other view s, credit card debt today is used as a preferred payment method to purchase everything, including groceries and services.

The Australian Bureau of Statistics (ABS) identified that 55 percent of Australian households incur credit card debt, and a number of studies observe that if properly applied, “personal debt can simultaneously bring prosperity to the financial institutions and to consumers” (Ajzerle, Brimble & Freudenberg, 2015). Advantages to consumers include use in offset strategies, security, efficient payment, funds transfer and recording keeping. However, personal debt is not without risks. When used inappropriately, personal debt.

a. An explanation of the selected management accounting topic

This observation of “Budgeting in Australia” attributed on the management accounting topic. The article primarily discusses Australia’s recent economic and fiscal performance and then focuses on the budgetary formulation process. After a discussion of the role of the various organisations, .the article highlighted various aspects of budget how to implement or manage it (Blöndal et al., 2008). The article concludes with a special section on Australia’s efforts to break the status quo with the government organisation. If discuss about today’s modern phenomenon like major chunk of people used credit cards and in Australia there is very relevant topic is budgeting influence on effective used of credit debt  in Australia. Credit card debt has become indispensable to the way of life and is accepted as part of today’s phenomenon. This study examines how to personal budgeting can influence the effective use of Australian credit card debt (Ajzerle, Brimble & Freudenberg, 2015). Credit card debtors are those who consider they do not need a budget due to insufficient income and expenses followed by those without a budget but often earning is more than $180,000 p.a. Participants with the lowest effective use of credit card debt are those who do have a budget and they cannot follow budget.

Studies shows for budgeting Australian governmental organisation. After a parliamentary discussion about it, the article reviews various aspects of budget implementation and execution. This review was undertaken in September 2007; following the election of a new government in Australia in November 2007, some new policies are highlighted, encompassing budget formulation, process, and accounting, management. The new government has a strong policy platform of increasing the openness and transparency across all areas of government operations. In the area of the budget, it has a specific policy platform-  “Operation Sunlight”. This section outlines past practices and, where appropriate, comments on the changes instituted by the new government. On 16 April 2006, the current Minister for Finance and Deregulation (then as the Shadow Minister for Finance) released a discussion paper entitled “Operation Sunlight”. Operation Sunlight sets out the new Australian government’s policy to enhance budget transparency and accountability (Blöndal et al., 2008).

The credit card debt perspective  The purpose of this study is to examine the effect of simple personal financial management strategies (such as budgeting) have on the effective use of consumer debt, and in particular credit card debt. Given the growth in consumer debt and anecdotal evidence of consumers struggling with credit cards that advisers and the media report, we contend this is an important area to gain further understanding of the effectiveness of the use of debt and how simple personal financial management tools (e.g. budgets) impact upon this. In addition, we note that there is little empirical evidence on this issue in Australia to inform practitioners and policy maker (Ajzerle, Brimble & Freudenberg, 2015). This paper details an Australian survey of 680 people, which explored their use of credit card debt, and whether this was regarded as effective or ineffective in terms of having a tendency to increase an individual’s financial wealth. The study then considers individuals’ credit card effective debt score in terms of their financial management strategies, in particular personal budgeting. It was found that those individuals without a personal or family budget due to the low income and expense levels as well as those with a written budget that they follow ‘most of the time’, utilised credit card debt more effectively. In contrast, those individuals who have a written budget but rarely follow it used credit card debt less effectively.

Ajzerle, S., Brimble, M., & Freudenberg, B. (2015). A (W) hole in the Financial Budget: Budgeting's Influence on the Effective Use of Credit Card Debt in Australia.

Rubin, I. S. (2016). The politics of public budgeting: Getting and spending, borrowing and balancing. CQ Press.

Wildavsky, A. (2017). Budgeting and governing. Routledge.