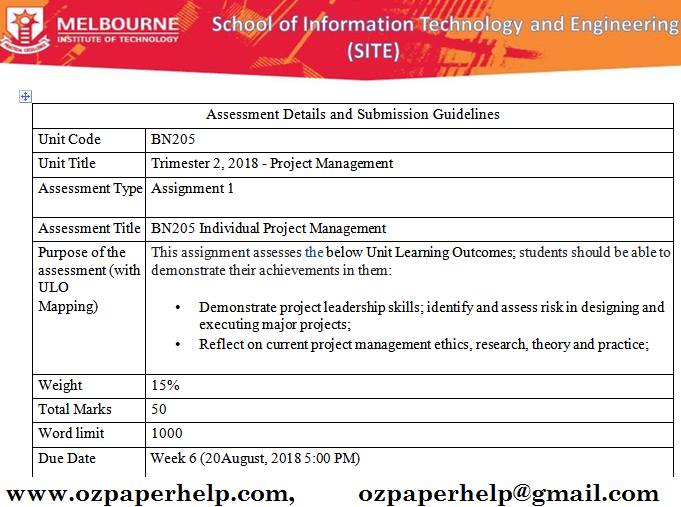 Purpose of the assessment:

As a project manager, your career will be driven by decisions, often dozens or more per day.  Some decisions are small and barely noticed while others are more prominent and could have serious ramifications on yourself, your organisation and your stakeholders.    Decisions like this will most likely require deep thought as they involve people, resources and the environment.   Sometimes these factors are in conflict, creating a dilemma and significant risks where your awareness of Ethical issues in a professional setting will be vital.

To guide ethical behaviour and help with tough decisions, the Project Management Institute (PMI) has developed a Code of Ethics and Professional Conduct and an Ethical Decision-Making Framework.  This assessment will require you to use your knowledge of the PMI code and framework and apply it in a real life case study.

Wayne Davidson is a software engineer in the aerospace division of Occidental Engineering, a large engineering firm.   For the past two years he has been working as a test engineer for Operation Safe Skies, a project to build a prototype of the next generation air traffic control system.   This project, which is funded by a contract from the Federal Aviation Agency (FAA), is a very important one for Occidental.   With all the cutbacks in defence spending, the aerospace division has been losing business.  The Safe Skies project has provided much needed business, and could lead to a much larger contract if successful.   Mindful of its strategic importance, the company had bid very aggressively for the original contract.   In fact they had "lowballed" it, bidding less than it would take to do the work properly.   They felt that was the only way they could beat out their competitors, who were just as hungry for the work.   Because of their somewhat shaky financial position, the company was not willing to take a loss on the project, so the project has been underfunded and understaffed.   Nevertheless those working on the project have made a heroic effort, working eighteen hour days seven days a week to meet the deadline, because they know how much it means to the company, not to mention their own jobs.   They are now very close to success.

A version of the prototype has been completed and turned over to Wayne for testing.   He has run extensive simulations on it and found that it works as it should except for one little problem.   When there are too many aircraft in the system, it will sometimes lose track of one or more of them.   The "forgotten" aircraft will simply disappear from the screen, there will be no trace of it anywhere, and it will be ignored by all of the collision avoidance and other safety tests.   Wayne has been working with the software designers to identify the cause of the problem, and they have traced it to a subtle error in memory allocation and reuse.  They are confident that they can fix it, but it will take a month or more to do the redesign, coding and testing.

Wayne meets with his boss, Deborah Shepherd, the project manager, to discuss the implications.  She tells him that what he is asking for is impossible.   The contract requires that the company deliver a fully certified, working version of the software in three days for system integration and test.   The government has developed a new, get-tough policy on missed deadlines and cost overruns, and Occidental is afraid that if they miss this deadline, the government will make an example of them.   They would be subject to fines and the loss of the remainder of the prototype contract; and they might not be allowed to bid on the contract for the full system.   This would have a devastating effect on the aerospace division, resulting in thousands of lost jobs.

They consider whether they can do a quick patch to the software before turning it over, but Wayne adamantly refuses to release any code that has not been tested thoroughly.   There is always a chance that the patch would interact with some other part of the program to create a new bug.

"Then we'll have to deliver the software as is," Deborah says.   "I can't jeopardize this project or the jobs of my people by missing that deadline."

"We can't do that!" exclaims Wayne.  "That's like delivering a car with defective brakes."

"Don't worry," Deborah reassures him.   "We have contacts in the FAA, so we know their testing plans.  They will do a lot of simulations to make sure the software works with the hardware and has all the functionality in the specs.  Then they will do live tests, but only at a small airport, with a backup system active at all times.  There is no way they will overload the system in any of this.   After that they will have some change requests.  Even if they don't, we can give them an updated version of the program.   We can slip the bug fix in there. They will never see the problem.   Even if they do, we can claim it was a random occurrence that would not necessarily show up in our tests.   The important thing is no one is in any danger."

"Maybe they won't find the bug, but I know it's there.   I would be lying if I said the system passed all the necessary tests.   I can't do that. Anyway, it would be illegal and unprofessional."

"You can certify that it is safe, because it is, the way they are going to use it."

And so he does.   In the end Wayne signs off on the software.   It is delivered to the FAA and makes it through all the preliminary tests, including live tests at a small airport in the Midwest.   As a result of these tests, the FAA requests some changes in the user interface, and when Occidental delivers the new software it includes a robust solution to the problem of the disappearing aircraft.   No one outside of Deborah's group ever learns of the problem.  In fact Occidental's success with the prototype leads to major contracts for air traffic control software, giving much-needed business to the aerospace division.  This saves hundreds of jobs, and allows the company to add hundreds more.

Wayne Davidson, however, takes early retirement once the prototype project is finished, in order to write a book on software testing.   He feels that the book should have a chapter on ethics, but he can never bring himself to write it.

What do you think about Wayne's decision?  Was it ethical?

Prepare a report of about 1000 words that gives an ethical analysis of the issues raised in the case study.  Your report should at least include the following:

•      Executive Summary oYou should provide a brief summary of your main findings and research so that the reader can know its main purpose.

o        In this section you should (briefly) state the case study being analysed. You should also discuss the purpose and scope of the report and the sources of the information that you have used. That is, you should provide an overview of what you intend to write about in your report, so that the reader can anticipate how you are going to present the material and what it will consist of.

o        Identify the ethical issues that arise in this case study.

o        Identify the potential consequences to the stakeholders of accepting this aggressive bid and risks involved in this project.

o        Identify the potential breaches of the Project Management Institute (PMI) ethical standards by the Project team.  Examine the PMI code and identify requirements that are relevant to this case study.

o        Deborah and Wayne are attempting to resolve the ethical dilemma that they have. Having completed your ethical analysis recommendations as to how they should proceed.

o        Provide short concluding comments that remind the reader the main purpose of the assessment, how you went about addressing the ethical issues of the case study, what references you used and what the main findings were.

The report should have a consistent, professional, and well-organized appearance. Create the report (Minimum 1000 Words).

1.      Your report should include the following:

•      The cover page must identify students’ (name and number), teaching staff, and assignment.

•      The report must include executive summary, table of contents, introduction, discussions (with heading/sub-headings to address the requirements listed above), conclusion and references.

•      Reference sources (APA style) must be cited in the text of the report, and listed appropriately at the end in a reference list.